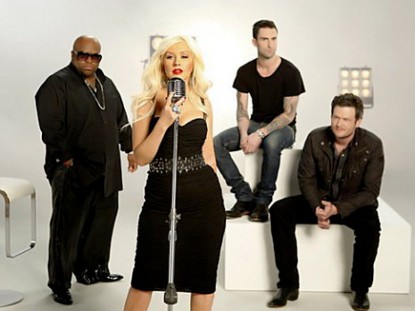 The Voice, NBC’s singing-talent competition, delivered some good and (um. . .) not so good voices last night in its most watched episode of the season. The episode drew in approximately 14.5 million viewers.

In last night’s episode, judges/team leaders Christina Aguilera, Cee Lo Green, Adam Levine, and that Country star Blake Shelton each filled the remaining spots on their teams. This was my first time watching the show, and I must say, it is sort of addicting. It hasn’t quite replaced American Idol in my book, but it is nonetheless a decent show.

Last night was the final round of pairings/match-ups chosen by the celebrity judges. In case you’re a Voice newbie like I am, all you must know to understand the show so far is that the judges each picked a group of singers that interested them; from their group of “awesome” singers they sorted them into pairs, or duets, and over the last few weeks have been having them “battle” it out in flame throwin’ duets on stage.

Of course, only one person in the duet combo can win to join the official team that will sing for the nation’s popular vote. Sad day. After several weeks, the teams–each consisting of four individuals–have been filled.

In a rapid fire recap, here’s how the “battles” went down last night:

Team Adame Levine: Jeff Jenkins vs. Casey Desmond. Casey, a girl with the fakest red hair I’ve ever seen (I’m a ginger, I have it on good authority) was simply doomed from the start. The two sang Elton John’s “Don’t Let the Sun Go Down on Me.” Jeff wowed the judges, and ultimately he won the final spot on Levine’s team.

Team Blake Shelton: Xenia Martinez vs. Sarah Oromchi. It was the battle of the shy girls. Shelton said he’d specifically saved this duet until the end so he could see who “would finally break out of their shell.” They sang a not-so-hot rendition of “I’ll Stand by You” and, eventually, Xenia was crowned the winner.

Team Christina Aguilera: Lily Elise vs. Cherie Oakley. This one made me extremely uncomfortable, partially because the sounds of shrieking cats make me uncomfortable. They sang the Clarkson song “Since You’ve Been Gone.” It really is never a good idea to take on Clarkson. When will the world realize? Why, Christina? Why would you choose such a gigantic song for them to sing? Lily Elise was eventually crowned the champion (for reasons I can’t understand).

Team Cee Lo: Emily Valentine vs. Curtis Grimes or Country Singer vs. Glam Rock. The country singer ended up taking the prize after singing “Need You Now.” But people sort of forgot the singing once they got to the end. The two kissed, sparking the all-too-funny Blake Shelton to say “You guys were supposed to du-et, not do-it!” Oh, goodness. Is this was I’m going to have to put up with for the rest of the season, yet another “jokester” judge on a reality TV show?

Overall, the show was very good, and while there were some singing moments that made me cringe a bit, I thoroughly enjoyed the overall dynamics of the show. Sort of a new take on the singing competition. I look forward to watching next week for the live rounds. Leave comments below telling us who you felt was the best!