The Voice — Don’t Forget To Vote (For Beverly McClellan)! 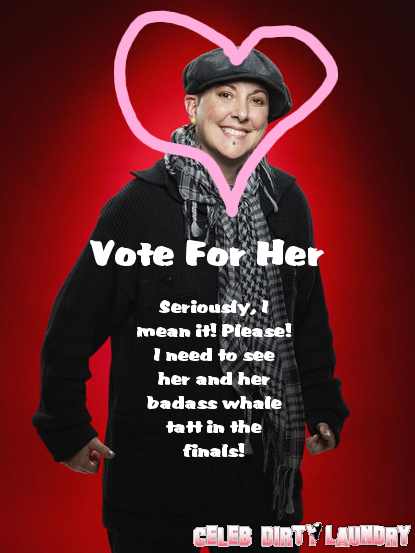 The Voice is about to finish up here on the west coast and, I’ve got to say, some of the talent is absolutely amazing! To be honest, I was wary about the show at first, mainly because none of the judges ever have any negative criticism (and with reality TV, especially singing competitions, one expects loads of negative crits). But now I know why there rarely ever are any . . . because everyone on the show is just super fancy and has a fantastic voice!

I’m writing this post with one specific goal in mind: to unleash CDL’s ultimate-secret-power-of-brainwashing-and-magical-mind-control to urge the masses (AKA you, our fantastic readers) to vote for Beverly McClellan.

If you’re not keeping up with the show, then you might not know who this bald-headed-sweethearted-badass is. All you need to know is she’s a rocker, she’s blues-y, her tattoos command the stage, her voice is raw/edgy/honest, her talent is real, and if you don’t vote for her I just might have to use more of CDL’s super secret powers* to track y’all down.

Beverly is originally from Virginia and has spent nearly twenty years in the Fort Lauderdale area working in clubs and bars. On the most recent episode, Beverly said she’s “Looking forward to giving her music wings. . .” As far as I’m concerned, she’s been flying ever since I first heard her sing on the show, and I hope she soars all the way into the finale.

To vote for my favorite, Beverly, CLICK HERE! But hurry up, the voting window closes 10 A.M. ET June 22nd!

As with all reality TV shows, your vote matters and could, ultimately, determine the fate of a person whose dreams are on the line. So help them out!

*Disclaimer: Celebrity Dirty Laundry doesn’t have any means of controlling your mind (unless Robyn Good, our editor, keeps the powers locked up in a box somewhere and just hasn’t given me access to them yet). So please don’t sit in your office at work biting your nails in worry and trying to fend off our Jedi mind tricks.