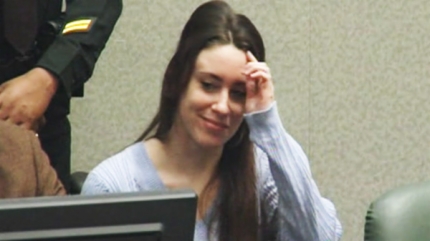 As most of the world (shockingly) has heard already, Casey Anthony was found not guilty of murdering her two-year-old daughter, Caylee.  The jurors believed there was – despite all the lies she told regarding her daughters disappearance – insufficient evidence that proved she killed Caylee.

Casey was convicted of 4 separate counts of lying to authorities, which sparked a major manhunt.  Now, I’m no lawyer, but given those details alone, what does that say about the woman?  This is someone who blatantly lied to the police, yet she was still found not guilty?  Words still cannot even describe how wrong this makes me feel.

Casey was sentenced today based on those charges, with each carrying a maximum of a year in prison. After meeting with attorneys this morning and going over with the department of corrections Anthony’s time served, the judge has given Casey Anthony a release date of Wednesday July 13 – next week!  The last I had heard was that she would be expected to get at least a year for lying to authorities, but now she will be a free woman next week.  Is this what our judicial system has come to?

That’s not even a fraction of the time she would have been spending if convicted.  Casey’s defense tried to argue that her four misdemeanors occurred on the same day therefore should be counted as one single crime.  And her lawyer actually sleeps at night?

So, Casey might be “innocent”, but she’ll still be behind bars for one more year.  I know I’m not alone in my thoughts, and the only thing that makes me be somewhat ok with all this, is that pretty much everyone knows what the truth is.  We don’t need to have a law degree to figure this one out.  Why the judicial system failed, I’ll never know.  But Casey’s life will forever been tainted by guilt and the knowledge of what she knows.  And what everyone else believes.