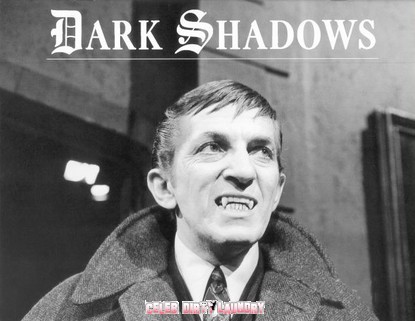 Director Tim Burton was in Los Angeles at an exhibit of his own art when he revealed some of his intentions for his current production of Dark Shadows. Production is currently underway in London with stars Johnny Depp, Helena Bonham Carter, Eva Green, Michelle Pfeiffer, Chloe Moretz, and Jackie Earle Haley and Dark Shadows is scheduled for release on May 11, 2012.

And here is what Tim had to say: “It’s been hard to kind of come here because I’m just starting, and it’s a weird tone and it’s a lot of actors and, you know, we’re not starting with the simple stuff; we’re sort of getting right in there. You like to kind of sneak up on it a little bit, but this one we just kind of slammed right into it… .”

“I’m early into it because it’s a funny tone, and that’s part of what the vibe of the show is, and there’s something about it that we want to get. But when you look at it, it’s pretty bad. I’m hoping that it will be — it’s early days, let’s put it — I’m very intrigued by the tone. It’s a real ethereal tone we’re trying to go for and I don’t know yet.”

Tim added: “I have no plans for [3D]. I loved doing “Alice” in 3D. Frankeweenie, gonna do that in 3D. There’s people like, ‘Everything’s gonna be in 3D,’ or ‘I hate 3D!’ I think people should have a choice. I don’t think it should be forced on anybody. At the same time, it’s great, some of it.”

From Barnabus To Edward Cullen – Why Do We Love Our Vampires?

This will be Burton’s eighth collaboration with Depp. The director talked about their artistic bond:

“I just had an immediate connection with him. I didn’t know him, but he just felt right for Edward Scissorhands. We’re friends and colleagues, and we’ve always taken the tack of not working together just to work together. It’s got to be the right part, the right movie, all of that sort of thing. There’s a good sort of non-communicative communication, you know. Because especially back then I was not a good verbal communicator, and he’s a bit similar, but there’s more of a psychic kind of connection, I would say, that sort of has remained. I like actors, too, that like to change, become different things. Those are the kinds of actors I find fun and exhilarating to work with.”

However talented is Johnny Depp he will have a terribly difficult time matching the brilliant performance of Jonathan Frid who played Barnabus Collins – the vampire and central character – on the Gothic television series upon which the movie is based.