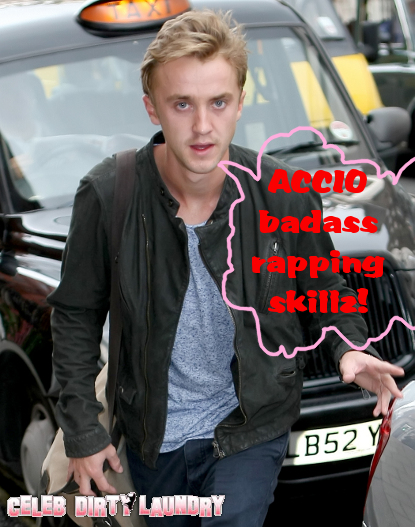 I feel like all I’ve been doing as of late is stalking Harry Potter stars, but what can I say, wizards are what’s hot in the news right now! My recent finding? Tom Felton AKA Draco Malfoy, that pure-blooded wizard who I’d like to petrify (with Petrificus Totalus, a’ course), has decided to bag-up his wand and grab a microphone. Scared yet? It gets scarier, scarier than He-Who-Must-Not-Be-Named. He wants to start rapping — RAPPING! As in throwing a whole bunch of beats down. THAT kind of rapping.

Tom, who has clinched a recording deal with an independent label, revealed: “I was thinking of doing some N-Dubz-style stuff. I am looking to get into the grime rap UK scene.”I’m going to change my image – backward caps, the lot.” He cited Dappy out of N-Dubz as his inspiration but said: “It’s still under wraps so I can’t really talk about it.”

Don’t think that this is a joke, fellow readers (even though I can’t help but think of it as one). This is for real. Draco the Rapper is coming, and he’s going to be throwing down beats like none other.

Perhaps we should all hold off on our judgment until we hear his gangsta’ rhymes? I’m thinking that might be a good idea. You know what they say about people who cast judgment too early . . . I actually don’t know what people say. But I’m sure some people, somewhere, sometime have said something about it.

What do you think about Felton’s rapping endeavors? Let us know what you think in the comments below.

If you haven’t already, make sure to follow us on Twitter: Robyn @celebdirtylaund. I’m a Twitter noob. I only have one friend, and that one friend is “TwitterTips” because I’m just learning how to Tweet. Follow me too: Nick @SanfordNick. Together we’ll keep you up-to-date on all the celeb news!