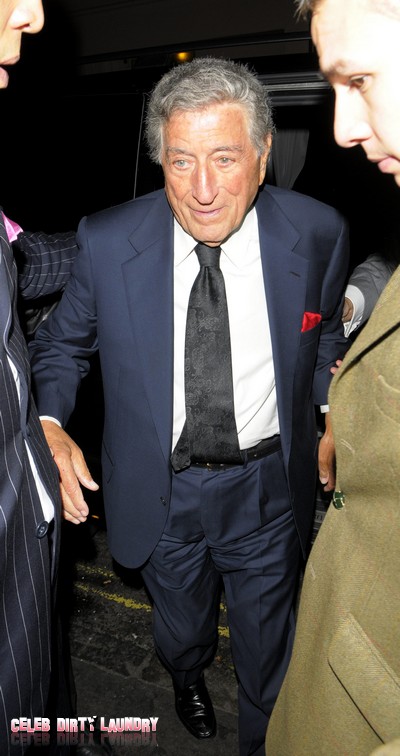 Lady Gaga seems to love to take off her clothes in front of other people and so when Tony Bennett asked to sketch her she jumped on the opportunity – hopefully she didn’t also jump on Tony!

Gaga has exposed that she posed nude so that Tony could draw pictures of her. The idea, if you want to call it that, was conceived by the renowned photographer Annie Leibovitz.

Speaking about the experience on CBS TV special ‘A Very Gaga Thanksgiving’ which aired on Thanksgiving night she said: “I walked in and said, ‘Well Tony here we are,’ and I dropped my robe and I got into position. I felt shy and thought, ‘It’s Tony Bennett, why am I naked?'”   Do you believe that Lady Gaga every feels shy?

The pictures that Tony sketched of Gaga will be published in Vanity Fair magazine next year.

At the beginning of the holiday show, the two singers performed ‘The Lady Is A Tramp’ – the track they recorded together for Tony’s album ‘Duets II’ – together, and later Gaga admitted she has a special connection with Tony.

She gushed: “Oh Tony he’s so handsome. I feel terrible whenever his wife is around because he is so charming and such a gentleman.”

And it appears the feeling is mutual with the ‘I Left My Heart in San Francisco’ singer saying: “She is the most beautiful person I ever met but there is something very special about her.”

In an interview with Katie Couric for the program, Gaga revealed she hates to talk about her romantic life and when she eventually gets married she insists won’t reveal any details of her nuptials. Right, she’ll probably have the ceremony filmed and broadcast on every media available.

Gaga said: “My love life is the only thing I don’t talk about. The day I get married, no matter how many helicopters are flying over that chapel, they are not getting one picture.”

“I don’t know how artists do it. Talk about their lives and marriages and divorces and boyfriends. It’s sacred in a different way and I would rather reveal it in a poetic way.”

This is hilarious – Gaga blabbing about her supposed modesty – what a phony – since as we reported earlier she had no problem announcing to the world that men with big d*cks turn her on. Does that sound modest to you?