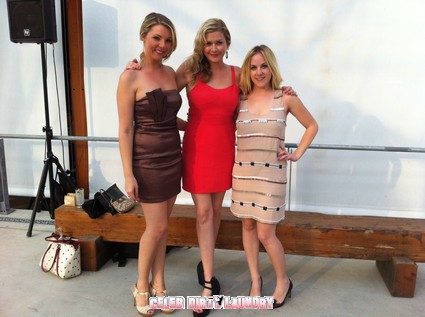 I was fortunate enough to get the opportunity to attend last night’s 2011 Annual Smut Soiree, hosted by Lainey – the queen of celeb smut – and Etalk correspondent.

The event, attended by a plethora of dressed to the 9’s ladies – and a few boys here and there – was held in Toronto at Evergreen Brickworks; a fantastic venue that catered to the crowd of hotties eagerly anticipating what dirty juice Lainey and her co-horts would reveal.

Absolut sponsored the event, so you can imagine the delectable vodka drinks that were flowing.  My girlfriends and I had to try every kind, naturally.

Upon entering we were greeted with Perrier and mint, candy covered apples infused with Cadbury’s Caramilk (another sponsor) and coated with ginger.  Um, Yum!

There was a photo booth in place, along with areas where girls could get they’re hair and make up done.  One of the highlights (aside from all my new found gossip I learnt) was getting interviewed by Lainey’s crew, where I got to put in my own two cents as a CDL writer.

Ok, so now on to the smut!  Lainey and her gossip panel opened up freely about certain celebrity experiences they’ve encountered, and oh how fun it was to get the juice!  Although I can’t vouch for their opinions and info, I will say this; Lainey despises Mischa Barton, Jennifer Aniston is not the ‘girl next door’ that everyone claims her to be, Scarlett Johansson doesn’t have very many friends (when one doesn’t have too many friends what does that suggest?), and that a certain Hollywood actor, whose last name rhymes with Shutler, only sleeps with married women.  Oh ya, and Angelina Jolie is skinnier in person…..yayyyyy smut!

Click on the thumbnails below to enlarge the photos!