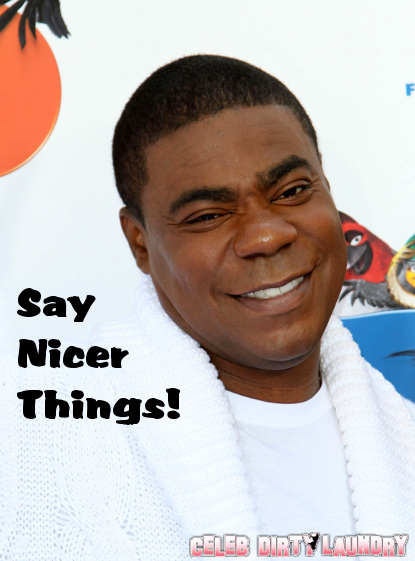 Oh, goodness, Tracy Morgan! The comedian returned to the world of stand-up comedy with a show at the Carolines comedy club in New York. Now, we all know the situation surrounding his anti-gay remarks issued a couple of weeks ago, which caused major problems for the comedian. So the question now is: does Tracy Morgan have another problem on his hands, yet another apology in the works?

To begin the show, The New York Times reported that Morgan began by stating he’d simply been misunderstood for his offensive anti-gay comments made during the Nashville show.

“I believe gay, straight, anybody, everybody’s supposed to be happy in this world, man,” said Morgan, as the night drifted to a close.

Near the end of his set, the comedian ventured into another realm of sensitivity when we began making jokes about disabled people. “Don’t ever mess with women who have retarded kids,” he said. Hundreds of “Uh-ohs” filled the room, which somehow was a signal for him to continue going with the joke. “Them young retarded males is strong. They’re strong like chimps.”

To drag it out even further, Morgan concluded with a story about his alleged teen love, who he described as “a cripple” with a fake arm, a mechanical larynx, and a portable dialysis machine.

SIGH. Mr. Morgan, perhaps you should take a break from speaking for a little while, or stop your words altogether. What do you all think? Has Tracy Morgan cornered himself into a situation that will warrant yet another apology?