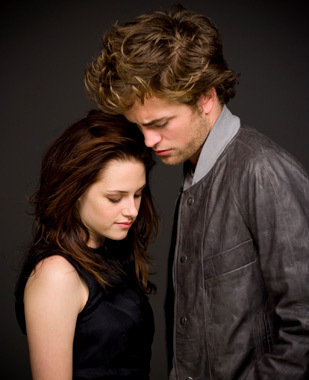 Robert Pattinson is becoming known as something of a hard party type of guy and this is really pissing off his girlfriend, Kristen Stewart. The ‘Twilight’ stars looked happy enough at Sunday’s MTV Movie Awards, but reports have made it clear that Kristen is in an uproar over Rob’s constant outings in Canada, where he is filming Cosmopolis.

The problem is exacerbated because Robert Pattinson and Kristen Stewart will be separated off and on now that their days of filming the Twilight movies are done. While Rob’s working in Vancouver, Kristen has been stuck at home looking after the couple’s dog, and she’s allegedly had enough.

“Rob’s been partying hard,” said an insider. “He’s been out almost every night at concerts and dinner with pals – and this is hot on the heels of him going out clubbing with Sienna Miller in London a few weeks ago.”

While the couple looked happy enough at the MTV Movie Awards let’s remember that they are ACTORS and unlikely to show any discord in public – at least not before they make their millions off of the ‘Twilight’ series. In fact, Kristen Stewart is rumored to be heading to Canada this month to see Robert Pattinson on set – is she showing up to police the young stud?

Of course only time will tell but if the normal behavior of Hollywood couples is anything to go by then don’t be too surprised if the future holds some ‘interesting’ times for the pair. There are those cynical people, including me, who think that much of the romance between Rob and Kristen is more about advertising ‘Twilight’ than any true love between them.