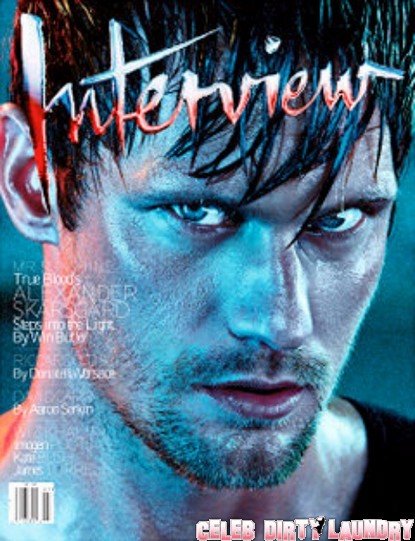 Alexander Skarsgård is not stuck on being a scary and SEXY vampire forever – even though he has shot to peak stardom in his role as ‘Eric Northman’ in HBO’s ‘True Blood.’  “I do get a lot of scripts sent to me where they basically want me to play Eric from ‘True Blood,’ but just a different name in a different movie,” the actor said in the latest issue of ‘Interview Magazine.’

“That’s not interesting to me. I don’t want to play a character that I’ve played for four years on a television show, change the name, and make him a zombie instead of a vampire.”

Skarsgård, whose turn as vampiric overlord Eric Northman has many fans hot and bothered, explained that for him, the roles that are most interesting are those that represent a facet of his own personality.

“In a weird way, I always play myself, just through different mirrors,” he said. “If I read a script and I don’t connect with a character, if I can’t find the character on the page in my soul, then I’m not going to be able to do a good job.”

Nevertheless there is a difference between playing a role that reflects an aspect of his true self and actually bringing that role home with him. Skarsgård admitted to getting a little creeped out himself when fans – and potential directors – confuse his personality with that of his on-screen character.

“The thing that I feel to be a problem potentially is that you become that character, that in the industry, people associate it too closely with who you are and what you can do,” he said.

His “mysterious bad guy” personality has the potential to lock him into some pretty predictable roles, he explained, when it’s really nerves that he craves when looking for the next project – well, that and “f— you money” that enables him to have the freedom to choose his own future.

“There’s got to be something new, something fresh,” he said. “I want to almost be intimidated when I embark on a journey. I wouldn’t say there’s a fear, but I do get slightly nervous in the beginning when that happens, and I like that feeling.  That triggers me a lot.”

No doubt Skarsgård has hit the sweet spot with his role in ‘True Blood’ – what he does next professionally will show us if he has more than one role – one character – to show to us.

Click on the thumbnails below for more Alexander pics!