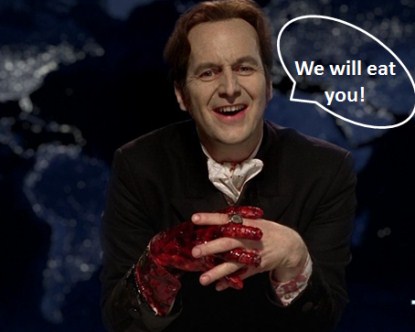 There is a war brewing out there and it has to do with the legitimacy and interpretation of the two rival schools of vampirism – Twilight’s and True Blood’s.   Denis O’Hare who plays the evilest man on TV – the horridly savage and cruel gay vampire Russell Edgington on True Blood – says that the Twilight Vamps are wimps.

Dennis said “Real vampires don’t sparkle, they don’t glisten – they can’t go out in the day and they definitely aren’t celibate! Come on!”  And guess what, he’s right!

Ever since Abraham ‘Bram’ Stoker wrote ‘Dracula’ over 110 years ago all fans of horror have known that daylight – the sun – is anathema to vampires – also and very significantly it is largely the sexuality and seductive power of the vampire that powers their ability to exert their will over humans.  A celibate vampire would be like a vegetarian pirhana.

Even though Denis disagrees with the Twilight take on the modern vampire, there is one thing the actor can totally relate to and that is encounters with crazy fans.

“People ask me to bite them,” Denis reported. “It happens a lot. In my rough neighborhood of Fort Greene in Brooklyn, I was inside a Bravo across the street from me and this big Dominican guy who was working there was like, ‘Hey man, can you bite me?’ And I’m like, ‘You’re not going to beat me up afterwards?’ But I did it, and we took a picture!”

What a great idea – a reality show in which the main players on Twilight challenge those on True Blood – no biting allowed!