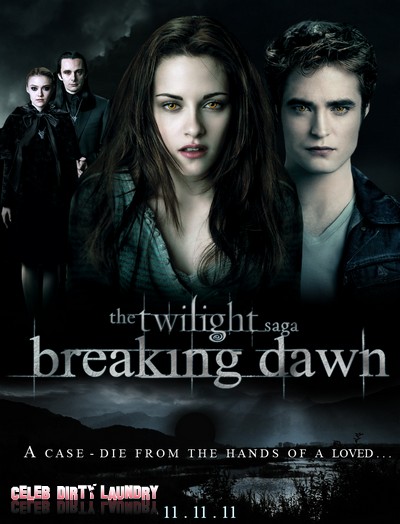 The Twilight Saga: Breaking Dawn – Part 1 is off to an amazing start at the box office already breaking into the top 5 all time taking in over $140 million so far.

The second-to-last installment of the hit vampire series, starring Robert Pattinson, Kristen Stewart and Taylor Lautner, pulled in a scary $30.3 million from Thursday’s midnight showings alone.
Coming in at a distant second place was animated film Happy Feet 2, which opened with takings of $22 million while Immortals dropped to third place with earnings of $12.2 million.

Rounding out the top five were Adam Sandler’s comedy Jack and Jill ($12 million) and family film Puss in Boots ($10.7 million) at fourth and fifth place respectively.

It’s all about the money in Hollywood – so keep going to see Robert Pattinson and Kristen Stewart and do your part to ensure their comfy retirement.