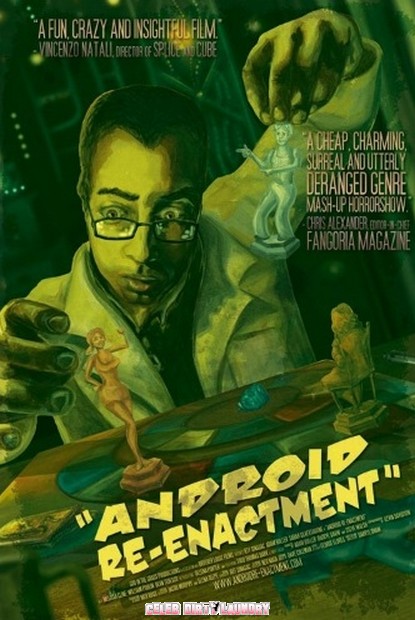 I was fortunate enough to get the opportunity to go on another wild adventure as an actor, and get the chance to work alongside an amazing cast and crew in the upcoming sci-fi film, Android Re-Enactment.

The film, directed by the uber talented Darryl Shaw, is set to have it’s first screening in July, and if the trailer is any indication of what to expect, then I am super excited!!!

Some of the cast and crew, including myself, recently had the opportunity to promote the film on the web/video show ‘Converging Conjectures’ shown on www.thatchannel.com and was hosted by Spencer Venne.  Although Darryl, our producer Steve Walsh, and my co-star Jeff Sinasac have been privy to all of the footage thus making it what it is today – I hadn’t had the opportunity to see most of the footage, therefore was able to watch it with a different eye.

My first thought – and do trust me as I truly don’t say this because I was a part of the film – was, “wow, this looks really, really good.”  It’s a funny thing as an actor working so hard on a project, immersing yourself in the character, then walking away from it hoping you’ve done your role justice and the rest is out of your hands.  I am proud of the film we made, from auditioning for Darryl, the long drives to our home away from home in Niagara Falls with my cast and crew, the amazing kindness and support we received (making an independent feature length film is no easy task I assure you without the dedication, belief, and drive offered without condition by those around you) to the passion that was evoked from all of us who just knew we were creating something great.

I’ve never had so much fun in my life playing the robot of my past self.  Jeff Sinasac nails his role as the deranged mad scientist Ermus, whose only obsession is to recreate past events where he supposedly lost his love, Candy (played by yours truly).  This wouldn’t be interesting without Candy’s robot parents, and her robot boyfriend who just can’t seem to conform to Ermus’ rules.  Sound a little Groundhog Day?  Good, because it’s better than that.