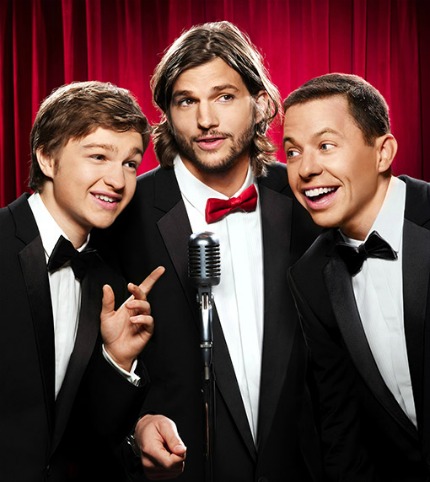 Last week was the Season Premiere of Two and a Half Men without Charlie Sheen.  Tonight is the second part of the season premiere called ‘People Who Love Peepholes.’  If you missed last week’s show, read our official recap here!  In a poll we ran last week after episode one more than 70% of readers were not impressed with the show.   We decided to give it a second try tonight and hopefully all the Charlie Sheen bashing is over and they just get one with the show.  I also hope Ashton Kutcher keeps his clothes on!

In part two of the season opener, Walden asks Berta the housekeeper if she will stay on and while she immediately gives him a BIG yes, we get to hear what she is thinking about Walden in her head “I could bite that ass like an apple”. Alan wishes Walden luck and tells him before leaving that his “face gives women erections”. Walden finds the peephole in the front door and is intrigued by it, then bounces up the stairs to his new abode.

Alan starts unpacking at his mother’s house and she lets him know that she is not putting her life on hold for him, she has a date that night and tells him they will be having rough sex so he should stay away from her bedroom. (that’s creepy, most moms would just say I have a date tonight)

Walden calls his ex-wife and asks if she will take him back, she says no and hangs up on him. Berta goes to console him and while Walden tells her that he’s never felt so bad, Berta (in her head) lets us know that she’s never felt so good while she’s hugging Walden.

Walden stops by to see Alan and asks him if he wants togo out and do something, they end up driving around in Walden’s $100,000.00 car. Walden makes a confession, he tells Alan that he is lonely and Alan tells him he feels the same.(are these two going to hookup?)  Walden starts telling him about he his ex-wife doesn’t love him anymore and the angrier he gets about the situation, the faster he drives and tells Alan life is not worth living without her. Walden heads to his house to see his ex-wife and when she threatens to call the police, Walden doesn’t give him, he asks Alan to help him climb the gate and then asks Alan to climb over with them and when they are on top of the gate, she turns on the high votage security on the gate and buzzes the two of them.

Walden asks his ex, Bridget, to take him back and she says she won’t because she is tired of taking care of him, it’s like living with Peter Pan. Before the two leave, he asks her if they can play Donkey Kong first?

Ok, now I am confused, the two are driving fast in the car and the next minute the two are naked together? Alan remembers that they went to a liquor store and then skinny dipping, all of sudden we see Berta in a chair (naked as well) and she says the skinny dipping was all her idea.

Back in Charlie’s former house (now Walden’s) a former girlfriend of Charlie’s, Penelope, arrives and starts crying when Alan tells her that Charlie has passed away. Walden appears and all of sudden, Penelope’s grief vanishes and she flirts with Walden just as his ex-wife arrives at the door. Alan quickly pretends that Penelope is his girlfriend and Bridget sits with Walden and decides to give him another chance to prove that he is a grownup.

Walden walks Alan to the door and says he owes him, Alan decides to cash in and asks to move in, Walden says yes.

Show is over, not much better tonight!  What did you think, sound out in the comments below!