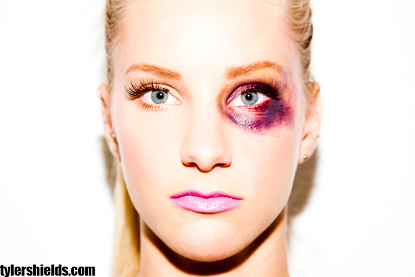 So . . . Tyler Shields. You’ll probably only recognize the name if you’ve seen/heard about the previous photo shoots he did with my fave Celeb Lindsay Lohan. Well, now, he’s detached himself from LiLo and employed the talents of another young actress whose name you may not be familiar with, but whose face you’re sure to recognize: Heather Morris, who plays the ditzy blonde Brittany on Glee.

In a recent shoot with Tyler Shields, Heather Morris appears as her usual blonde self, but with an extra element painted across her face: a grotesque/slightly glamorous black eye. And the photos have people in a huge frenzy.

In my opinion, there are three ways to achieve fame: 1, do something no one else has done before you; 2, do something better than someone has before you; and number 3, generate some good ol’ fashioned controversy. It might seem like to some people that our lil’ photog friend opted for door number 3.

Tyler Shields is an up and coming photographer (not the paparazzi kind), but no way has he achieved the status of other famous artists, such as Anne Leibovitz,  who works to depict Celebs in all their famous glory. While some individuals actually love his new work, there are many individuals who’ve stated that he’s working to “glamorize the pains of domestic abuse. . .” and “perpetuate the images of battered women.”

I think this is a perfect example of the question artists asks themselves time and time again: When creating art, should one temper their artistic vision when dealing with controversial subject matter? It’s a tricky — near impossible — question to answer with absolute certainty. Art is meant to evoke emotions — whether positive or negative, that’s up to the viewer to decide. I won’t give my personal opinion on this issue, as that’s not the purpose of this blog, but Tyler Shield’s work continues to do just that: make people react.

So . . . is he a talented artist? I think so, very much indeed. Is his work ethical and/or morally just? Well, that’s up for you to decide.