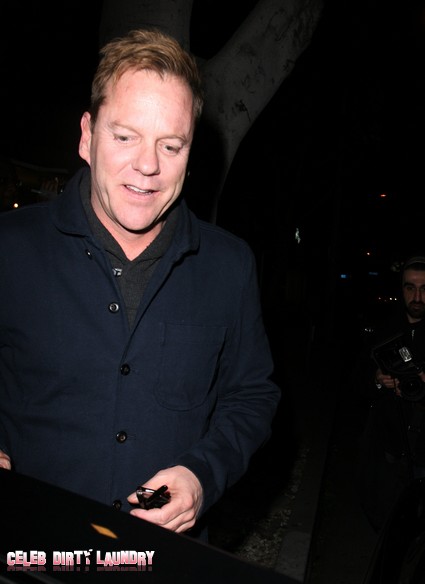 I’d like to get something off of my chest – I miss Kiefer Sutherland. I do. I really do. There I’ve said it.  Kiefer was a weekly fixture in my life as the angsty Jack Bauer on the 8 season run of the heart-pounding, critically acclaimed series, 24. The kind of character that could do bad things for good reasons and just about every woman he dated ended up heart broken or dead. But you still rooted for him – no matter how many skulls he cracked or knee caps he popped in just under an hour.

Save for being the recognizable commercial voice for Ford and now Bank of America (you can’t mistake that smooth whisper-growl of his), Sutherland’s absence from primetime has been noticed. Well… TV fans rejoice! The wait is almost over.

Kiefer is slated to return to primetime in the upcoming FOX drama, Touch. Kiefer plays Martin Bohm, a widower and single father unable to connect with his mute 11 year old son until he discovers his son’s ability to see patterns and numbers that connect seemingly unrelated events. It’s Martin’s job to connect the patterns and find the people that they affect (likely before it’s too late). Screen legend Danny Glover, Gugu Mbatha Raw (from the ill-fated series Undercovers) and Titus Welliver (aka the Smoke Monster from Lost) also star.

On the Touch script, Kiefer recently told the Hollywood Reporter:  “After 24 I didn’t expect to be back to television quite as quickly as I have. It was an incredible experience and I really wanted some time to digest it and there was more to digest than I thought… I got to about page twenty five and I remember I put it down and just said ‘shit’ there’s no way around it, I have to do it.”

The series will preview on January 25 on Fox, with the season premiere not until March, 2012. If the trailer is any indication, I’d say it’s going to be worth the wait! Will you watch? Check it out:

And on the completed 24 movie script (very exciting), Kiefer added to the Hollywood Reporter:  “We have worked very long and hard over the past two years on a screenplay but it was actually much harder to take this idea that was told in 24 hours and condense it into a two-hour movie.”