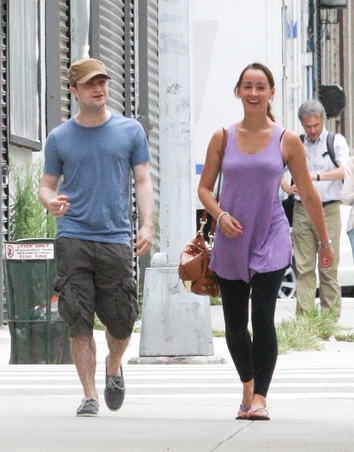 Yesterday we wrote an article about Daniel Radcliffe and his new girlfriend whose name wasn’t known by the media. Well, guess what, readers . . . We’ve got a name for you now!  The girl’s name is Rosanne Coker and the two supposedly met while on the set of the Harry Potter films. Rosanne is a production assistant, and she will also be working on Radcliffe’s new film The Woman in Black.

The couple has been dating for little over a year now, Rosanne’s father told the media. “They would really prefer to keep things quiet. But Rosanne has worked on the last three ‘Harry Potter’ films, so she and Daniel have known each other quite a long time. But they have been going out for just over a year now. I have met Daniel and he is a lovely guy. I’m just really happy for Rosanne, and as long as she is happy that is all that matters to me.”

So this news came from the dad? I wonder if he got paid for the interview *side glance+suspicion* ? Sorry, I digress. I won’t speculate any further.

What do you all think? Are they a good lookin’ enough couple for you?