US Weekly: Ben Affleck Tried To Help Jennifer Lopez With Her Failing Marriage 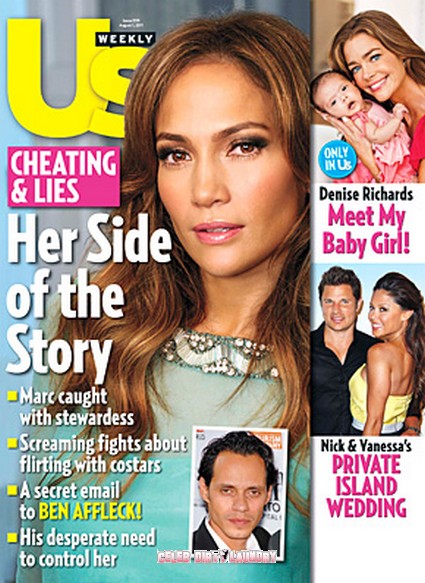 Jennifer Lopez and husband Marc Anthony, 42,  announced that they were divorcing last week and now Us Weekly says that Jennifer Lopez’s ex Ben Affleck, 38,  tried to help Jennifer with her failing marriage.  Jennifer and Ben dated back in 2004 for about 18 months.  Ben went on to marry Jennifer Garner and they have two children together.

Apparently Jennifer Lopez’s mother Guadalupe Lopez contacted Ben because she always liked him and she was looking for advice for her daughter.

In this issue:  “She always liked and trusted him. [Ben] replied back on email, wished her well and offered what he could,” the source says of Affleck, 38, now happily married with two daughters to Jennifer Garner. (Lopez, now 41, wed Latin crooner Anthony, 42, just months after she and Affleck split.)

Three days after that secret email exchange with Affleck, Lopez and Anthony announced the end of their union in a joint statement. “It was a very bad marriage, and Jennifer got the courage to end things,” an insider says, adding, “[Marc] was a terrible husband.”

If it is true I cannot see Jennifer Garner being very happy about the situation.  The last thing she probably wants is Ben around his ex girlfriend!