US Weekly: Sara Leal Talks About How Ashton Kutcher Seduced Her 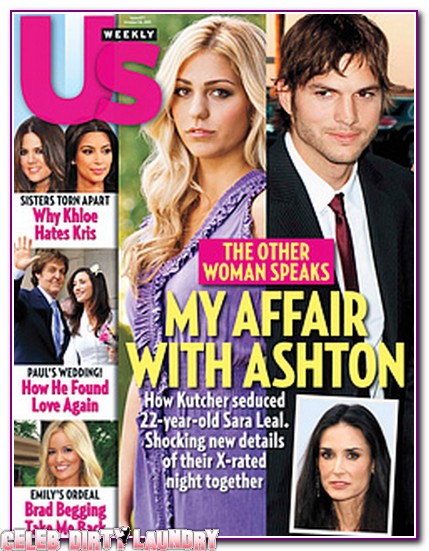 The October 17th, 2011 issue of Us Weekly features the cover story “The other Women Speaks: My Affair With Ashton”  Ashton Kutcher‘s rumored mistress Sara Leal, 22, scored this week’s cover.  She broke her silence and gave the magazine all the detail on how Ashton seduced her and all the shocking details of their X-rated night together.  I bet the magazine paid her big bucks to make her break her silence!

Us Weekly has more: “He just came up and kissed me,” the Texas native tells Us of Kutcher’s first bold move in the wee hours; minutes later, Leal, Kutcher and another young woman were completely nude and in a hot tub on the balcony. I didn’t think it was out of the ordinary,” Leal admits. “I wasn’t self-conscious about getting naked.”

When Kutcher claimed that he was “separated” from wife Moore, 48, Leal tells Us she believed him.   After retreating to Kutcher’s bedroom past 6 a.m., “he lost his towel and I took my robe off,” Leal says. “Then we had sex. He was good,” Leal reveals. “It wasn’t weird or perverted.  It also wasn’t 100 percent safe, either: Leal tells Us that Kutcher did not wear a condom during their one-on-one encounter.”

Since she is claiming unprotected sex I imagine we will soon be seeing rumors of her being pregnant splashed all over the place.   She has to milk this for all it is worth!   Sara also claims the two have lots in common and even discussed politics after their liaison.   Sara says Ashton loved being with her because he is an actor and most things are fake but being with her was real.

What do you think?  Do you buy her story or is this all about the $$$?  To read more details of her first one night stand, pick up a copy of US Weekly that hits stands Friday!