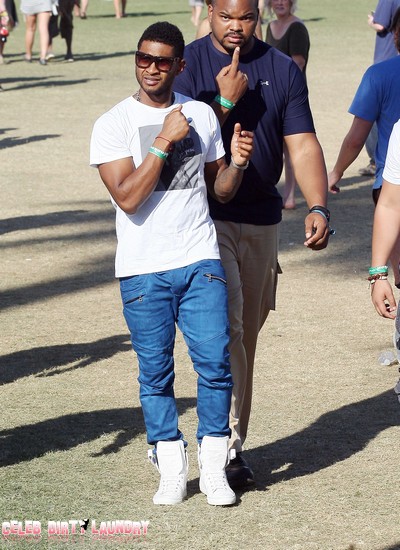 Usher parked in spot reserved for the handicapped and was subsequently attacked by an enraged woman when he refused to move his SUV.

TMZ reports that Usher “was bull-rushed in the middle of a crowded parking lot in ATL last weekend — by an angry woman looking to fight the singer for parking in a handicap spot … and TMZ has the footage.

Eyewitnesses tell us .. Usher had just arrived to the Little 5 Points Halloween Parade (hence the guy in the Elvis costume) when the woman saw U’s SUV parked in a handicap spot.

We’re told the woman demanded the singer move his car — but Usher refused and she went ballistic … screaming, flailing her arms, and grabbing Usher’s hoodie.

At one point, she screams, “You don’t belong here!””

Sources say the woman’s husband eventually dragged her away from the scene and Usher drove away not long after. So far Usher’s reps have no comment on the incident.

Not very nice on Usher’s part – I’m sure his protege, little Justin Bieber, would have moved his Batmobile under similar circumstances – but Ushers parking piggery – however obnoxious, elitist, and illegal – still does not justify a physical assault.