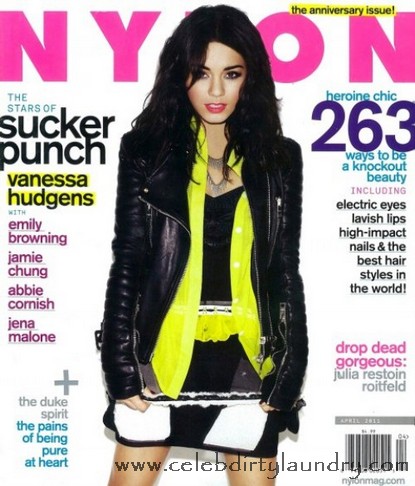 High School Musical star Vanessa Hudgens, 22, is looking badass on the April 2011 cover of Nylon Magazine. Vanessa has been having a badass makeover to promote her new film Sucker Punch.   They are saying Suckerpunch is about girls with attitude.  Hence Vanessa’s image makeover.  She got a new tattoo and showed it to David Letterman saying “She feels like a badass now.”  In the movie she shows her tougher side playing a badass character Blondie.  So I guess to make it more believable she is trying an image makeover.

Meanwhile, in the past week Vaness has had nudes leaked.  This would be the third set since 2007.   Not only have nudes come out but a picture of Vanessa kissing a girl and a barely there bikini cover has been released.   Seems like she is on a promotional blitz ;-)  Many thought that it was Vanessa herself that released the pictures to cause a lot of talk before the release of her new movies Sucker Punch and Beastly.

However Vanessa’s lawyer claims “She is deeply upset and angered that these old photos, which were taken years ago, continue to resurface.”

“It is particularly disturbing that whoever got hold of these private photos seems to be intent on illegally leaking them out over a long period of time. We are actively working with law enforcement to determine who is responsible and hold them accountable for their actions.”

So what do you think? Were the pictures released by a hacker? Or was the release done by Vanessa and her team to create some buzz about her new movie?