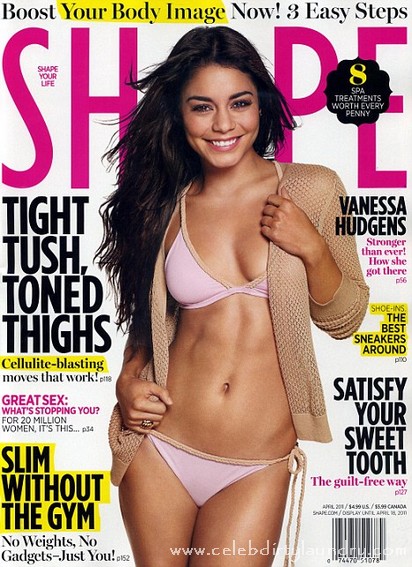 Disney star Vanessa Hudgens, 22,  shows off her toned physique on the cover of Shape Magazine April 2011.  Vanessa who  split from her boyfriend Zac Efron is promoting her new movie Sucker Punch and has been popping up in various states of undress.  Yesteday photos were leaked of her having some girl on girl action and nude pictures were also released of her.  Some believe she leaked the nudes herself to promote her new movie.    What do you think?  Nevertheless her body looks fabulous on the cover of Shape!

Below is a glimpe of her interview in the magazine.

On getting in shape for Sucker Punch: “I knew it was going to be hard but I didn’t know how hard. In the beginning I could dead lift 135 lbs.   By the end, I lifted 180 lbs. I was a monster … Exercise is amazing from the inside out. I feel so alive and have more energy.”

On former flame Zac Efron: “Long-distance relationships are hard no matter what. When you don’t have face-to-face time, it’s just different. Having an iPhone helped, but it wasn’t the same. We grew up together. It was nice to have someone to share all those experiences with. It was a good thing. The relationship kept me grounded and because I was with someone who knew me so well, I didn’t need to try to be someone that I’m not.”