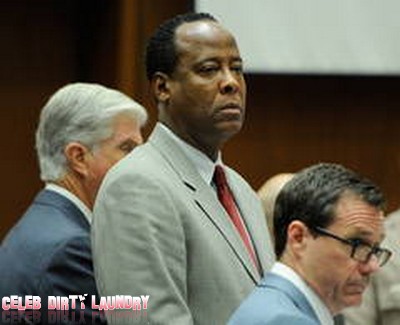 The Los Angeles Superior Court has sounded the two-hour warning, alerting the media that the jury in the trial of Conrad Murray for the involuntary manslaughter of Michael Jackson has reached a verdict. The decision will be read in the courthouse at 4pm EST.

Although jurors’ verdict will be read soon – if the verdict is guilty do not expect Dr. Murray to be sentenced immediately.

Should the doctor be found guilty of the charge against him, he could face anything from probation time to four years in prison Both the prosecution and the defense would file recommendations to Judge Michael Pastor, though the decision is his alone to make.

The received wisdom is that Dr. Murray will not actually go to prison, even if he does get a prison sentence, and will most likely serve any time given in county jail. House arrest is also a possibility, however unpopular hat might be.

The judge has 20 days from the verdict to pronounce sentence on Dr. Murray, though that could be waived if his lawyers decide to appeal the decision and file a motion for a new trial.

We’ll keep you informed about the verdict and its consequences right here on celebdirtylaundry.com