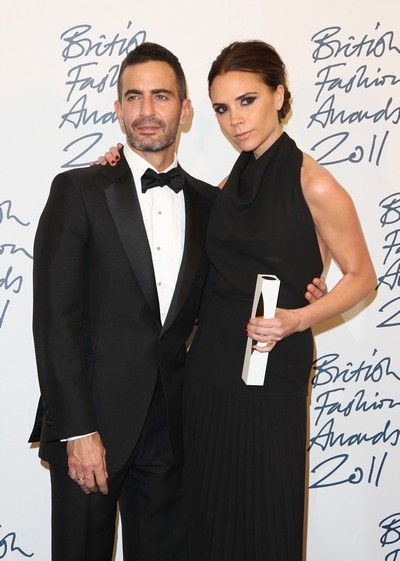 Victoria Beckham broke down in tears after winning Designer Brand of the Year at last night’s British Fashion Awards.  Victoria was overcome with emotion as designer friend Marc Jacobs presented her with the prestigious accolade for her Victoria Beckham line during the event at London’s Savoy Hotel.

Victoria was wearing a floor-length backless gown and her hair pulled into an elegant bun – told the star-studded audience: “I’m so sorry for crying. I’m being so rubbish. I would like to thank the British fashion industry for your support. I’d like to thank my team, you all know who you are, your focus, your creativity – Simon Fuller, my parents, my kids and my husband. Without David I wouldn’t have had the courage to do what I am doing.”

Soccer star David – who was at home in Los Angeles with the couple’s three sons – also paid tribute to his wife, writing on Facebook: “The boys and I are incredibly proud of Victoria after winning a prestigious British Fashion Award tonight.

“She has worked so hard and deserves all the recognition. It’s amazing what she has achieved tonight, very special.”

Other winners included Stella McCartney, who took home the prize for the Red Carpet Award while Sarah Burton – who designed Duchess Catherine’s wedding dress – was named Designer of the Year.

Alexa Chung was given the British Style Award while Paul Smith was named the BFC Outstanding Achievement in Fashion.

Designer Of The Year – Sarah Burton for Alexander McQueen