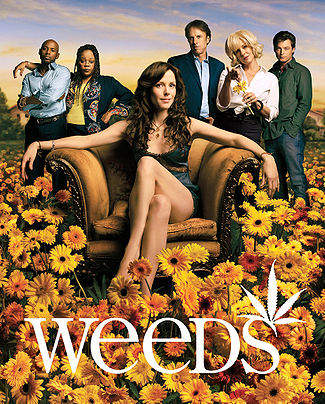 If you haven’t watched Weeds you are missing a great show.   The show’s central character is Nancy Botwin (Mary-Louise Parker), a widowed mother of two boys, Silas (Hunter Parrish) and Shane (Alexander Gould) living in Southern California, who turns to selling marijuana to support her family after her husband’s unexpected death.

If you are a huge fan like I am and have been watching the show you will remember that at the end of Season 6 As Nancy leaves the airport after putting her family on a plane, the FBI are waiting for them outside.   As part of “Plan C”, she confesses to the murder of Pilar, thus savineg her own life after ensuring the safety of her family, in particular, Shane.

The new season begins June 27, 2011 on showtime. TV Line has a sneak peek clip in which Nancy’s life behind bars is set to begin. There in jail, Nancy is to share a cell with a scheming Russian-American hottie by the name of Roya who has an “easy-on-the-eyes” brother named Demetri visiting her every now and then.

Nancy gets sprung she will find herself in a halfway house in which she’s detained. The new sanctuary comes with “its own busybody Mrs. Garrett, albeit a male one.   And her roommate there won’t be exactly a dream cohabitant, either.”

Creator Jenji Kohan indicated in an interview with TV Guide that the seventh season may be the last, feeling that seven years was a “good run“, however a spokesman for Showtime denied any decision having been reached.