Where Have You Been Ryan Phillipe? 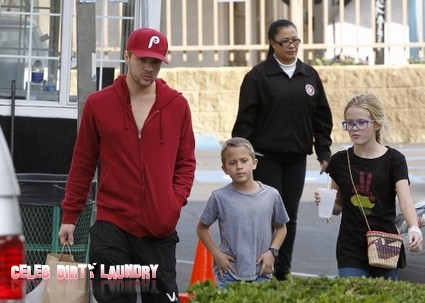 There are just certain celebrities who tend to fly under the radar from time to time.  I guess by flying under the radar I mean they aren’t caught in any scandalous or heated affairs, aren’t telling their life story on twitter, or gallivanting drunk through the streets – but you know what I mean.

So naturally, a Ryan Phillipe spotting will always peak my interest.  Little has been heard about the actor, ever since he and ex-girlfriend Alexis Knapp had their child, Kai (from what I can tell they weren’t together at the time – and still aren’t).

So obviously dealing with 3 children is a lot on one’s plate, but he still has time for his children that he shares with ex-wife Reese Witherspoon – Ava and Deacon.  They were spotted grabbing some food in L.A, with him looking quite the doting dad as usual.  Unlike some high profile celebrity divorces, Ryan and Reese seem to have kept it quite amicable.

Ryan is also said to be selling his Hollywood Hills him he once shared with his ex-girlfriend Abbie Cornish.  Starting fresh Ryan?  Seems so..nonetheless, always good to see you.