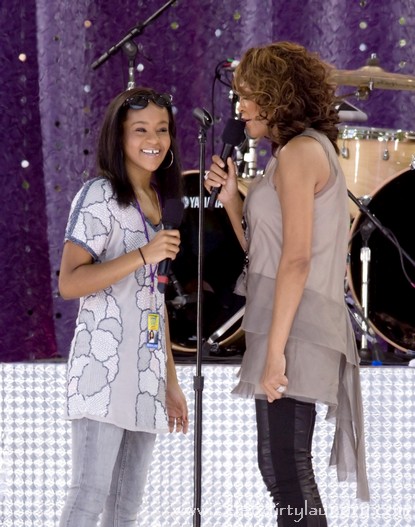 Whitney Houston schlepped her stoner daughter Bobbi Kristina to rehab after pics of her snorting cocaine appeared courtesy of The National Enquirer.

Crushed by our report  that her daughter – known to friends as “Krissi” – is hopelessly addicted to cocaine and booze, Whitney begged her: “Don’t let drugs ruin your life the way they ruined mine,” sources say.

“Whitney was devastated over the photos showing Krissi using cocaine, and The National Enquirer story that quoted her telling friends, ‘I’m just like my mother,’ a friend divulged.  “She called a family meeting and sobbed as she told Krissi, ‘I don’t want to lose you.'”

The singer, 47, also canceled plans to celebrate Krissi’s 18th birthday on March 4 in Atlantis, the luxury resort in the Bahamas, the source revealed.

“Whitney called Bobby, and they agreed that Krissi needs rehab,” the friend said. “They also agreed on a tough love move to shake Krissi up, and Whitney returned a Lexus convertible that she’d bought for Krissi’s birthday.”  Now that sure is tough!

Despite her parents’ decision, Krissi is fighting the idea of rehab, said the source.  What a surprise – most addicts are rather attached to their substances and would rather do anything than give them up.

“Krissi is denying that she has a problem. She says that she does cocaine for fun and isn’t addicted,” said the source.  Sure – everyone does it for fun the first few times but when you can no longer have fun without it, you are deeply addicted.

Meanwhile, Whitney and Bobby – who have both battled serious drug habits – are blaming each other for Krissi’s problems, sources say.

“Bobby reminded Whitney that she used to have drugs all over their house,” a friend divulged. “He also accused her of being ‘coked up’ in public, looking like a mess and setting a bad example all along to their daughter,” the friend said.

But “The Bodyguard” star was quick to snap back at her bad boy ex, said the source.  “Whitney told Bobby that he did drugs too and got into more legal trouble than she ever did,” the friend said.

Bobby, 42, has been arrested for DUI, possession of marijuana, driving without a license, probation violations and misdemeanor battery for slapping Whitney.

The former “New Edition” singer, who has five children with four different women, has also been dragged into court numerous times for failure to pay child support.

“Bobby and Whitney are pointing fingers at each other, but the truth is that they’re both responsible.  Krissi has been around while her parents and their friends were drinking and drugging ever since she was a little girl,” said another pal.

Krissi was only 12 when she was photographed drinking from a wine glass as her parents looked on.

In 2008 she was admitted to a psychiatric ward after attempting to slash her wrists with a razor blade.  Krissi’s suicide bid came after she tried to stab her mother during a heated argument.

And she was just 17 when a former boyfriend – who dated her for 2 1/2 years – snapped the coke-snorting photos that appeared in The National Enquirer.  He also claimed that he saw Krissi smoke pot and guzzle beer and the potent grain alcohol Everclear.

After The ENQUIRER’s explosive story hit newsstands, Krissi took to her Twitter account to blast her ex-boyfriend.  But she admitted that it was her in the photos, and said her mother “comforted me to the max.”

Now with Bobby’s blessing, Whitney is planning to send Krissi to an outpatient rehab program, said the source.

News Flash to the Parents of Krissi – outpatient rehab only works for addicts who want to quit, and I mean DESPERATELY want to quit.  We wish Krissi the best but hold out almost no hope that this half-way measure will eliminate her drug and alcohol abuse.