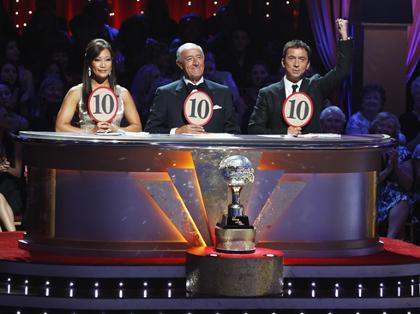 Tonight is the seventh Dancing With The Stars Result show.  DWTS is past the 1/2 way mark now and only six contestant remain.  The show last night kicked off with a behind-the-scenes look at the remaining couples as they get ready for their big Halloween night.  The Halloween Night event continued with an exciting Halloween-themed episode.  Each pair lit up the ballroom floor with killer costumes and electrifying dances to some of Halloween’s favorite spooky tunes.  If you missed last night’s episode read our official recap here!

Later in the night the contestants returned to the floor with group dances.  See Team Tango’s dance here and Team Paso’s dance here.

At the top of the leaderboard after last night’s performances is Ricki Lake and her professional dancer  Derek Hough who scored a combined score of 53/60 for their Paso Doble and team dance performance.   At the bottom of the leader board is Nancy Grace and professional dancer  Tristan MacManus who scored a combined score of 44/50 for their Jive and team dance performance.  It’s not over until the last score comes in but it seems pretty clear that Nancy Grace should be leaving the ballroom tonight.

The special performance tonight on the Results Show will be  global pop sensation Justin Bieber and the best selling R&B group of all time, Boyz II Men.  They collaborate for a television premiere performance of “Fa La La,” accompanied by pro dancers Mark Ballas and Chelsie Hightower.  Bieber will hit the stage for a second time with a knockout performance of his megahit song, “Never Say Never.” Pro dancer Derek Hough joins “So You Think You Can Dance” dancer Alison Holker for an exceptional Latin infused choreographed number.

The show starts and the judges decide that Team Paso: Ricki & Derek, Hope & Maksim and Rob & Cheryl do the encore dance.

In a shocking elimination David Arquette & Kym Johnson are voted out, what happened????!!!!

I am so surprised David was miles better than Nancy Grace.   What do you think?  Are you as shocked as I was and the audience who booed when the announcement was made?  Sound out in the comments below!