Who Will Win The X Factor USA Season 1? (Poll) 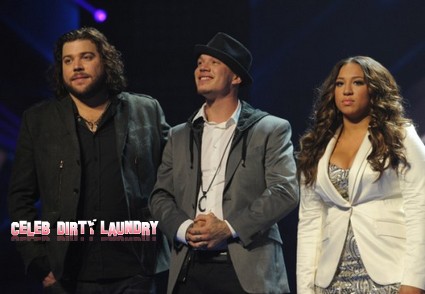 Did you watch  Melanie Amaro, Josh Krajcik and Chris Rene’s performances last night on The X Factor USA?  Celeb Dirty Laundry wants to know who you think will win the show.  Last night was the final performance show of  The X Factor USA season 1.  After three months of performances we had a last opportunity to see the remaining three contestants performing one last time.  With a $5 million recording contract and Pepsi commercial on the line the three contestants belted it out.  If you missed last night episode you can read our official recap here.

On last night’s show the remaining contests performed with duets with superstars: Josh Krajcik with Alanis Morissette (Video here); Chris Rene with Avril Lavigne  (Video here) and Melanie Amaro with R. Kelly (Video here).    After the first five performances there was really no clear winner, it was  still anyone’s crown to win.  But that was all over when Melanie Amaro took the stage to perform her last song and the final song of the evening,  Beyonce’s ‘Listen.’  Following her performance, judge La Reid declared, “That wasn’t a $5 million performance.That was a $50 million performance”, though Simon Cowell went even further and suggested Melanie had done enough to win the competition.

The winner of the show will be decided by viewer votes and announced on tonight’s results show which we will be covering live HERE.  In the meantime vote in our poll below and let us know who you think will win The X Factor USA crown!