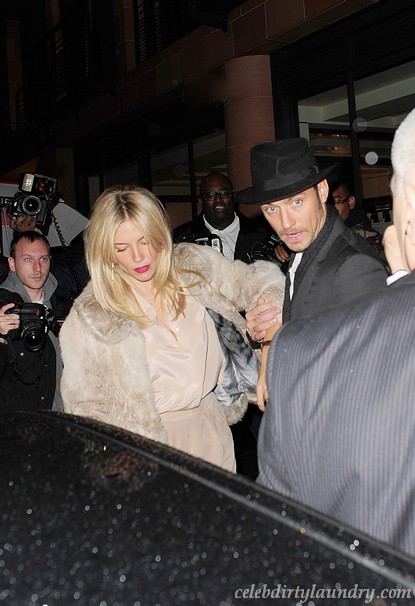 Sienna Miller reportedly dumped Jude Law because he hadn’t set a date for their wedding!

The twosome splashed out $16 million on a home in London together, but she demanded a wedding date and he was procrastinating. A source said, “She was upset he hadn’t set a date for the wedding. Sienna wanted the wedding of the year and then suddenly Kate Moss gets engaged. The pressure probably just became too much. Jude said he deeply loves Sienna and he wants to sort things out. He’s desperate to win her back and has promised he’ll set a date for the wedding. He’s told her to take her time and think about it as they have the opportunity for a great future together and have bought a house.”

Sources close to Jude say that he was completely shocked that she chose to end their relationship. A source said, “Clearly things aren’t particularly rosy in Jude’s personal life. All I can say is that he’s gone through a rough time. These things are hard – it’s awful. The good thing is that he’s busy. He’ll keep on working. He’s shocked by this.”

Were you shocked by the news of their split? I mean, Jude is hot, but there isn’t enough money in the world to put up with his crap if he’s a jerk to a girl, right???