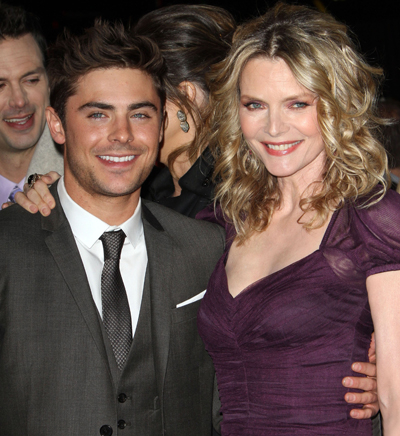 Once upon a time, circa 1990, kissing Michelle Pfeiffer would have been the fantasy of many teenage boys, thanks to her titillating roles in films like Scarface and as Catwoman in Batman Returns. More recently, the 53-year-old actress locked lips with Zac Efron in the upcoming film New Year’s Eve, but the High School Musical alum admitted that while he’s always had a crush on the film star, his on-screen kiss with Michelle “wasn’t very sexy.”

Reportedly, the 24-year-old heartthrob had to spit on the floor right before filming it, thanks to some erstwhile confetti.

“I definitely thought about how it was going to go down. In my mind, the way I pictured it, it was going to be perfect, very romantic, very leading man,” he said in an interview, reports ContactMusic.com.

“Then of course, as we went to film it, right when I went to dip her, a huge piece of confetti went straight into my mouth. I didn’t want to finish the kiss like that, so I spit and went for it. That’s actually in the movie.”

Still, while his kiss with Michelle didn’t go as well as he planned, he confesses that his “heart exploded” when he found out that he would be co-starring with her in the film.

“I met Michelle a few years ago during Hairspray and had a huge crush on her, always, from day one,” said Zac to Hitfix.com.

“And back then I was very, very young and very bashful, and around her I tended to put my foot in my mouth a lot. I didn’t really know what to say to her, and everything just came out wrong…I didn’t know what to do. But then I got to talk on the phone with [her] about this part, and she said, ‘I think we should take this to the next level. We should…get a kiss in there.’ And I was like, ‘I’m in! I’m in this movie! Sign me up! Let’s do it!’…It was awesome.“