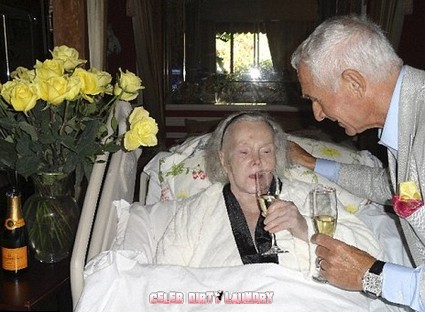 At least according to her daughter Constance Francesca Hilton he does.  Zsa Zsa Gabor, 94, who recently came out of a coma was celebrating her husband Prince Frederic von Anhalt 68th birthday yesterday. Prince Frederic von Anhalt released a photo of the pair holding a glass of Veuve Clicquot and toasting him.  The picture was taken in their Beverly Hills home which is currently for sale for $15 million. The couple have been married for 25 years.

Her only daughter Constance Francesca Hilton is furious over the picture.  She says Prince Frederic uses her mother for self-publicity.  In a strong statement Constance said: “He once again uses my mother to bring publicity to himself. He once again releases photos of my mother in unflattering situations without hair and makeup, two things that were so important to her.”

“This time he is feeding her alcohol, which could be detrimental to her condition since she is on numerous medications. It’s disgusting and no one is doing anything about it.”

Sounds like there is no love lost between Constance and Prince Frederic.  Constance also has previous claimed that Prince Frederic does not allow her to see her mother.   What do you think is the picture inappropriate?  Celeb Dirty Laundry wants to know!