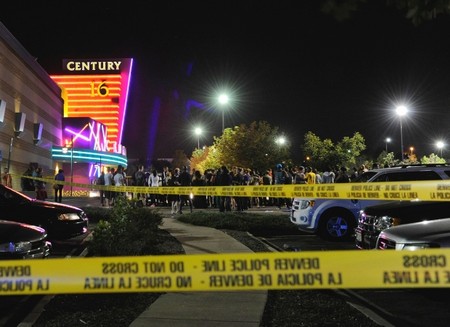 14 people are dead and dozens more injured after what is believed to be a lone gunman attacked the crowd at a midnight screening of The Dark Knight Rises in Aurora, Colorado early Friday.  10 people were killed at the scene of the crime and another 4 have died in hospital as  a consequence of this ‘Batman shooting.’  The extent of the injuries of the up to 50 people injured have not been released at this time. The 24-year-old male suspect opened fire after tossing a canister of what is thought to be tear gas spraying the unsuspecting crowd with deadly bullets.

Aurora Police Chief Dan Oates says that the suspect is now in custody and his apartment is surrounded by SWAT team members because he claims it is full of explosives.  Nobody seems to doubt the suspect at this point. Oates spoke at a early morning media conference saying: “This is a horrific event.”  The chief added that when the suspect was arrested he was black-clad and seemed to be attempting an escape in a car parked behind the theater.  The murderer was carrying a rifle and a handgun, was wearing a gas mask as well as a bullet proof vest.  A third gun was found inside the theater.

We “heard loud noises and [saw] smoke and thought, ‘This is a joke. This is fireworks,’” moviegoer Megan Walton told the Daily News.

Another witness, Salina Jordan, 19, told the Denver Post she saw one girl struck in the cheek and others in the stomach including a girl who looked to be around 9-years-old.

Jordan said she thought the popping sounds were firecrackers until someone ran into the theater yelling “they’re shooting out here!”

A third witness told a Denver TV the shooting broke out in the theater at the same time bullets were flying on screen. “There was a shooting scene in the movie, at the same time, there was a gun shot, a real one,” according to the witness.

President Obama was notified of the massacre early Friday.

Moviegoers decided to take to Twitter almost immediately after the attack: “Shots fired in the theater. #batman #aurora #colorado,” wrote one witness. “It was my theater. I’m outside. One of my friends is still inside. No one knows what’s going on.”

Celeb Dirty Laundry will keep you updated and we learn more about this Batman shooting and its perpetrator.

UPDATE: The suspect is identified as James Holmes from Aurora, Colorado.  The number of confirmed dead has been lowered to 12.