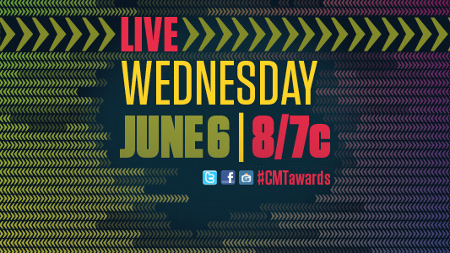 This year’s CMT Music Awards are set for Wednesday June 6th, 2012 at the Bridgestone Arena in downtown Nashville.  The ceremony will air live at 8 p.m. ET/PT on CMT and CMT.com. It will feature performances by Kenny Chesney, Lady Antebellum, Little Big Town, Brad Paisley, Carrie Underwood and Zac Brown Band.

So bookmark this page and make sure to come back for all the exciting happenings!

The five finalists for video of the year won’t be announced until the beginning of the show, so be sure to tune in to see if your fave country music star’s video will be up to possibly take home this coveted award! Once the finalists have been announced, fans can then hop on over to CMT.com where they can vote, vote, vote!

Your all star presenters will be Toby Keith and the hilarious Kristen Bell, who you know from Forgetting Sarah Marshall, Couples Retreat, and the narrator from Gossip Girl. Not sure what we can expect from these two hosts, but I have a feeling they’ll definitely bring the good humor and high energy to the show.

As we said above, we want you to come back here and watch the glam-tastic Red Carpet with us! Don’t forget to bring your Yee-Haw and cowboy hat: only Cowboys and Cowgirls are allowed access to this VIP party.