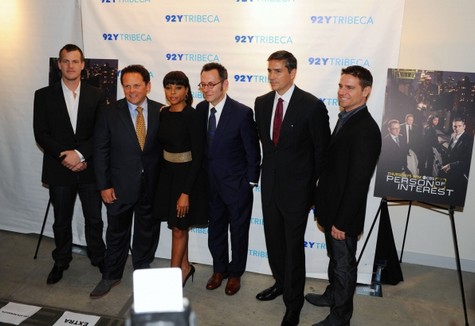 This past week we started a series here at CDL–  our 25 Days Til Christmas Countdown of our top screen gems. We’ve used this as a way to introduce you to some great shows that you may not already be watching- but sure should be.  Tonight we’re taking a look at the CBS’s drama, A Person of Interest which airs at 9pm on Thursdays.

A Person of Interest is centered around the character of John Reese (Jim Caviezel) who is a former Green Beret and CIA operative that for whatever reason is presumed dead and is just sort of floating through life until the day when he meets Harold Finch (Michael Emerson). Finch is a reclusive billionaire computer genius who is living under an assumed identity. Finch explains that after 9/11 he built a computer system for the government which uses information gleaned from omnipresent surveillance to predict future terrorist attacks. The problem is that this computer also predicts every day crimes too. While the government was not interested in these results, Finch is determined to find a way to stop the predicted crimes. He hires Reese to conduct surveillance and intervene as needed, using his repertoire of skills gained in the military and CIA. I’m not sure why Reese has agreed to this but together this duo takes on various situations each week and Reese usually slinks in to a situation, saves the day and slinks back out unscathed.

Reese is more often than not finding himself involved with cases that are connected to up-and-coming mob boss, Carl Elias (Enrico Colantoni). This is one of the more complicated villains currently on television. Elias seems to be such a nice guy but he is both brilliant and capable of absolutely anything.

Why exactly do all these things add up to a great show? I can’t exactly pin point what it is about A Person of Interest that makes it so good. I think it’s a combination of well written characters, strong story lines and exemplary acting on the part of the whole cast. This is one of those dramas that quietly cranks out quality week after week and it deserves a view if you’ve never caught it before.

Check out a sneak peek below of Thursday Dec. 12th’s “Shadow Box” episode.