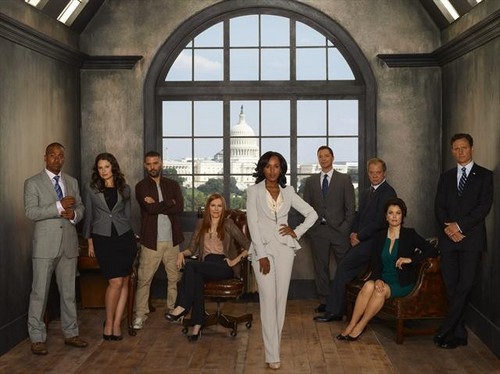 Are you ready for today’s choice in CDL’s Top 25 Television Gems Countdown? In case you’ve missed the last few installments, we’re taking a minute to focus on some of our favorite shows that we believe deserve a bit more attention then they seem to get. That said, number 22 is ABC’s Scandal which airs on Thursdays at 10pm.

Scandal is a political thriller that focuses on Olivia Pope (played by Kerry Washington) who spends the majority of her life working as a spin doctor that guards and protects the public image of some of the top political figures in the U.S. She was a White House Communications director before leaving to start her own crisis management company. While working for the White House she got extremely close to the President, Fitzgerald Thomas Grant (Tony Goldyn) , AKA Fitz. The two have had an off/on affair and obviously belong together. Mellie (Bellamy Young) is the First Lady and Fitz’s wife who is well aware of Olivia’s importance in her husbands life. The two woman have butted heads on several occasions and Mellie vacillates between loving Fitz and wanting him to look like the biggest public ass ever.

Every episode finds Olivia trying to save the career and reputation of another political figure as they fall from grace in the most human of ways. There’s also an underlying, ongoing storyline here that is slowly unraveling. It looks like Fitz was elected thanks in huge part to voter tampering and a coverup that shielded this fact is now beginning to unravel. Just how crooked is the government that has been elected to serve and protect the public? We’re only beginning to find out now, halfway through season two!

What makes Scandal so fabulous is the writing. The stories are complete and they connect. In one episode Olivia completely identified with the mistress of a dead politician while the guys wife was comforted by Mellie, also technically a wife, but not the true love of her husband. This show, with all of its high powered characters and bigger than life plots ends up being very human. In the end most episodes are relatable. We’ve been betrayed, or attached to the wrong person. We’ve all wished that we’ve made different decisions and that sometimes that bed that we make isn’t filled with nails when we have to lay on it.

Scandal is just good. It’s really that simple and you owe it to yourself to check it out!

Check out a sneak peek below of tomorrow’s episode “Happy Birthday, Mr. President”