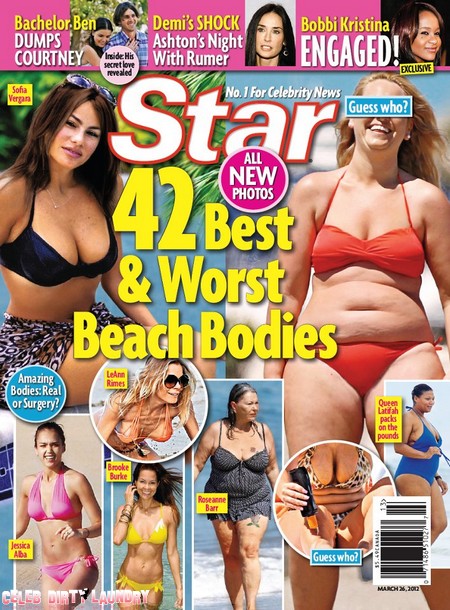 The March 26th issue of Star Magazine features the cover story ’42 Best and Worst Beach Bodies.’   The Magazine claims to have the scoop on the best beach babes and Spring beach bodies.  They know who’s hot, who’s not, who’s real, and who’s fake.

Best beach bodies include: Bethenny Ever After star Bethenny Frankel, 41, who reportedly retains her sexy figure with yoga.  She does admit to having a breast lift.  But, it is believed she had lypo to tone her tummy after giving birth.  Miley Cyrus who reportedly spent $50,000 on getting toned and Top Chef’s Padman Lakshmi who has a natural body and spends a lot of time in the gym so she does not have to starve.

Not to leave out the men we have beach bombs American Idol’s Steven Tyler,63, with a bad case of man boobs.  Also winning the man boob awards Gordon Ramsay and Simon Baker.

Also included in this week’s magazine Demi Moore is shocked about Ashton Kutcher‘s wild night out with her daughter Rumer Willis and Bobby Kristina Brown is engaged!

To see all the pics of the good, the bad and the ugly beach bodies, pick up the current issue of Star Magazine on stands now.