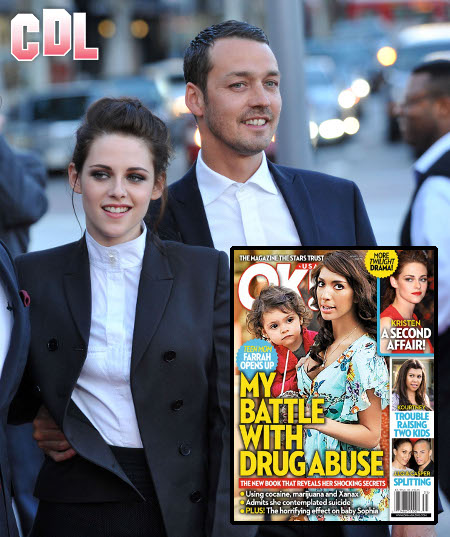 In the latest issue of OK! magazine, the tabloid reveals the secrets of Kristen Stewart’s affair — or should we say affairs. In a shocking by-line, Kristen is pointed out as having a “second affair”. Oh Poopy Jones, is she ever going to get off her pedestal of stupidity?

Giovanni Agnelli is the Stewart handmaiden and even though he reiterated that Kristen’s affair with Rupert Sanders was non-sexual (so they only shared war stories over biscuits and cream?) the rumours are exploding like a drunken nun’s face at a Sound of Music showing. Hey, whodunit Kristen? Could it be another Twilight star? Hey, as they say in the corner of hell you’re from, “If you cheat once, you’ll cheat again and a leopard stays with its spots and all that jazz… Derp.”

OK! is implying that Stewart is having sexy time with another, as of yet, unnamed man. We know she is living with Agnelli and that Robert Pattinson is jealous. She has also been accused of having an affair with Agnelli, but this is exceptionally old news in La-La Land, so who might this mystery man be? We feel about Stewart how a mother with a wooden breast feels about baby feeding snack time, so we don’t care whether the man is Jack Nicholson or the unseen entity from Paranormal Activity. However, the implications of a second affair would have devastating effects on Stewart’s dwindling reputation. It has recently been reported that Stewart will be dropped from the Snow White and the Huntsman sequel, which was almost immediately debunked by E! Online after the news broke this morning — she has never been attached to the franchise and it seems now that the sequel will be re-imagined in order to focus on Chris Hemsworth’s huntsman, if he is indeed re-attached to the project.

We don’t have an ounce of sympathy for Kristen Stewart, but the idea that she might have been involved in another cheating scandal sends shivers down our perfectly unhealthy writer backs. It seems that a gamma ray burst is not the most destructive anomaly in the cosmos, but that it is, in fact, a spoiled little girl with an overactive sex drive. Oh, wait. She didn’t have sex with Rupert Sanders, right?

Image credit to FameFlynet and OK!