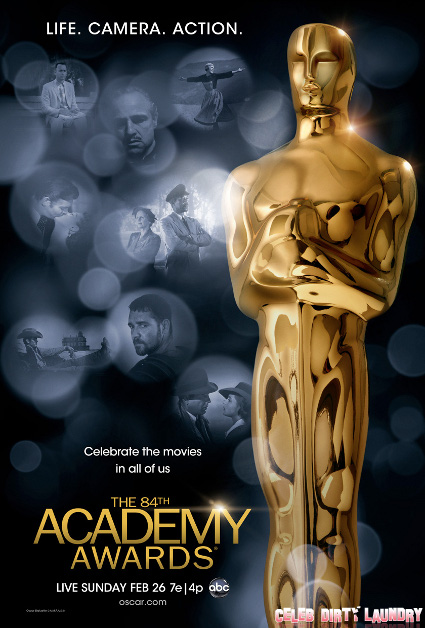 The nominations for the 2012 Academy Awards are almost here. The Oscars, as most of you well know, is by far the biggest awards show of the season and every actor in Hollywood (even if they’re only mildly popular/famous) will most likely be in attendance.

Last year brought us many great movies with a wide range of terrific performances . . . it’s going to be interesting to see how the nominations pan out. Who do you think will be the lucky actors vying for that golden statuette? Lots of people — people who know lots more about film arts than I do — are talking about what/who they’d like to see nominated this year. To see one movie-buff’s list of predictions, CLICK HERE.

What I gather from the “talk around town” is that nominees for Best Picture (perhaps the night’s biggest award), will likely include some of the following: The Artist, Bridesmaids, The Descendants, The Girl With the Dragon Tattoo, The Help, Hugo, Midnight in Paris, Moneyball, The Ides of March, War Horse.

The Academy (that oh so mysterious guild) will choose between 5 and 10 films, the magic number — when compared to past years — seeming to be in the 6-8 range.

There are so many actresses I’d like to see receive nominations, but I think The Help‘s Viola Davis and Young Adult‘s Charlize Theron deserve to be in the mix. E! is actually predicting that Theron will take home the award, claiming that Diablo Cody, the film’s screenwriter, “writes nominations as much as she writes characters.” While I don’t necessarily like that statement, it is a very true statement. Cody’s stories seem to be written/produced with the preconceived notion that they’ll inevitably be nominated for, and quite possibly win, awards.

As for Best Actor, I can’t really comment much. I haven’t seen many of the — from what I hear — stellar performances from Hollywood’s leading men this year. However, if I had to choose, based on past awards shows this season, I’d probably say Jean Dujardin (The Artist), George Clooney (The Descendants), and Brad Pitt (Moneyball) will all make the nominations list.

Well there you have it! A few predictions/hopes/dreams to tide you over until the real nominations take place Tomorrow Morning LIVE on E! @ 5:30 AM (PT)/8:30 AM (ET).

So, basically, what I’m trying to say is this: If you live on the west coast (like me) and you want to hear the nominations, presented by Hunger Games star Jennifer Lawrence, you’re going to have to wake up HELLA early.

Leave your personal predictions  in the comments section below!