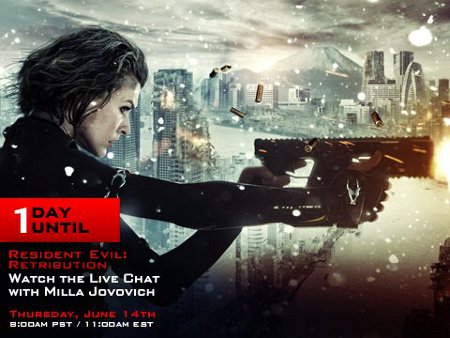 On June 14th, Milla Jovovich, star of the upcoming scifi-action movie Resident Evil: Retribution, will be doing a LIVE Q&A for all of the eager fans out there! The live global streaming webchat will lead up to the launch of the film’s epic trailer on Thursday, June 14th at 11:00am EST at the Regal Union Square Cinemas in New York. If you can’t wait for the newly released trailer, why not get the inside scoop from the film’s incredibly bad-ass-monster-demon-undead slayer yourself!

Jordan Hoffman of ScreenCrush.com will be moderating the fantastic Q&A. If this news has gotten your nerd brain riled up, here’s how you can attend the super amazeballs event:

“Fans will be able to attend the event by logging on to the Resident Evil Facebook Page and printing out an invitation; admittance will be granted on a first come first serve basis. Fans at home can log on to the Facebook page to watch the Q&A live; the event is being translated into ten languages worldwide.“

So if you want to join Milla and Jordan for this super fun Q&A, where they’ll talk about this highly anticipated film and all the badassery that went into making the movie, all you have to do is log onto the facebook page tomorrow morning at 8AM (PST)/11AM (EST).

So be sure to wake up bright and early tomorrow (if you live on the Western side of things like I do), grab your tea (or coffee), and polish that shotgun of yours . . . because we have some evil infected-zombie-things to kill — all courtesy of the Umbrella Corps of course. Hopefully our dear friend Alice will finally be able to overthrow the Umbrella Corps in this installment of the Resident Evil franchise. But I have a feeling this will be one of those neverending series. And with a franchise that continues to increase its revenue with each newly released film, why should it ever end?

One day, fingers crossed, our deal lil’ Alice will finally put an end to the Umbrella Corporation. Until then? We hope she stays awesome and hardcore.

The LIVE trailer will be streaming HERE on June 14th at the above listed times. Come back to us then!