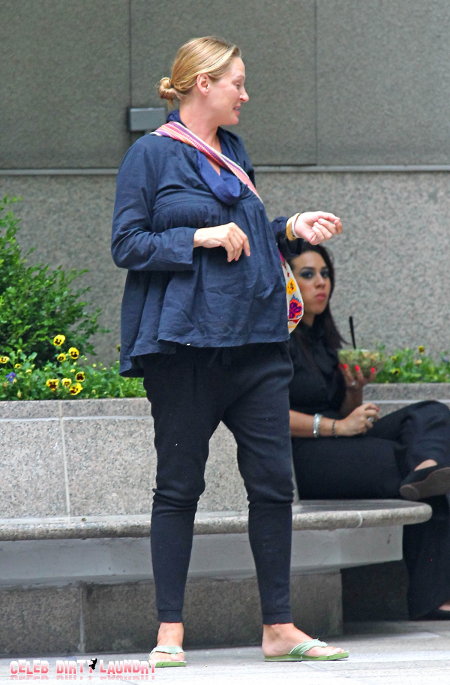 Uma Thurman is preparing for her third baby, and she’s flaunting her massive baby bump for the world to see!

Thurman was relaxed and prepared for her third baby by doing a little ice cream run. Thurman already has two kids, so she knows what it is like to be preggers. The 42-year old actress is preparing to give birth in late summer and one can see she is in her final trimester, looking at the pictures of her stomach and flowing clothes!

She already has two kids, 13 year old daughter Maya Thurman Hawke and 10 year old son, Levon Green Hawke. Both of them call Ethan Hawke (does he still act?!) dad. The new baby is actually London financier Arpad Busson’s kid. Thurman and Hawke married in 1998 and divorced several years later, due to infidelity rumours. Thurman and Arpad Busson started dating in 2007, but the relationship ended in 2009. They were spotted again at a Louis Vuitton fashion show in 2011 and in February of 2012 the couple revealed that they were having a baby together.

Thurman has enjoyed several decades of successful film and television work, with her most notable performance being that of Beatrix Kiddo in the brilliant Kill Bill franchise. Quentin Tarantino stated that he wrote the part specifically for Uma Thurman and used her as a muse in the creative process.

Uma Thurman has always been noted as a very intelligent actress, with one of the highest IQs in Hollywood, so we’re sure with her beauty genes and intelligence, her kids will turn out just right.

From CDL to you, Uma, congrats on your new babe! May it be a child genius!