Adam Lanza’s Sick Mind: Why He Did It & Who Else Knew 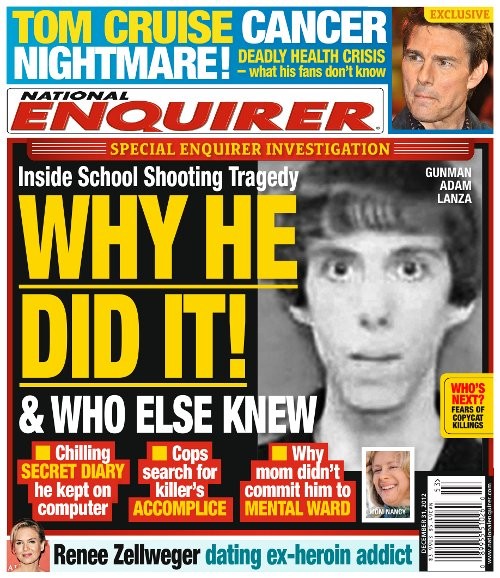 The subject on most Americans’ minds this week is the shooting at Sandy Hook Elementary School in Newtown, CT.   The new issue of National Enquirer is reporting an in depth investigation in to the events of December 14th, when Adam Lanza entered the school, killing 20 children and 6 adults after killing his mother in her bed.

There are still a lot of unanswered questions. What was Adam’s motive to kill? Was he mentally ill? What treatment did his mother get for him and did anyone see clues that Adam could be a violent person?  Why didn’t his mother commit him to a mental ward.  NE has the details of a chilling secret diary Adam kept on his computer.  The FBI is trying to put together Adam’s smashed computer to try to retrieve clues to his motive and his plans.

This week’s issue of National Enquirer  further goes on to claim that Adam did not act alone.  Reportedly, police are still searching for Adam’s accomplice.  Police are also on the alert for possible copy-cat killers.

An article in the New York Times describes what makes killers like Adam tick. In the case of Adam he was very shy and awkward. He may have felt he was not accepted into a group of kids he wanted to befriend. He may have wanted to retaliate against the people who hurt him. Killers like Adam may have wanted some recognition and feel murder would be the way to finally get that recognition. Why murder children? They will not rush to tackle him and stop the violence. Children will instead run and hide from the killer. Adding suicide to the mix might elevate his fame even further than just murder. The plan was to make his name known and not forgotten.

Also included in this week’s issue Renee Zellweger has a new boyfriend. The former Mrs. Kenny Chesney was seen kissing her new beau at LAX on December 12. Renee is dating Doyle Bramhall II, who is a rock musician. The couple first met at the University of Texas at Austin but only recently became couple. Renee has not been lucky in love. I keep routing for her that she will find the love of her life. This new guy, though, may not be Mr. Right. Doyle is a former heroin addict. Let’s hope his past won’t come back to haunt him and he breaks Renee’s heart. On the other hand, Renee lives a healthy lifestyle without drugs so she may be a good person for Doyle to date. He may not be tempted to go back to drug use if he someone like Renee in his life. He may have started drug use as a means of escape. The life of a rock musician means many lonely nights on the road and it can be exhausting work. Hopefully Doyle has learned better techniques to deal with his demons. I have to wonder why Renee would date someone she knows has a lot of baggage? He must be one hell of a guitar player…and kisser.

Tom Cruise has been hiding a big secret from his fans. No, he is not finally coming out of the closet or leaving Scientology. Tom has reportedly been battling cancer. The very fit and health conscious Tom may be dealing with the biggest battle of his life.

To find out more details about Adam Lanza’s sick and twisted mind and the rest of this week’s stories, pick up the current issue National Enquirer.