Adrienne Maloof: “I Could Feel the Heat on My Face” 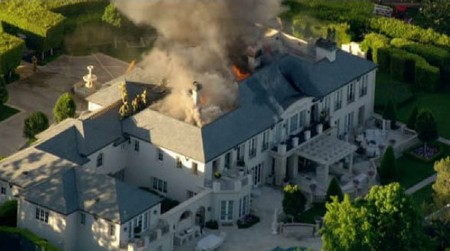 As some of you may have heard by now, the old house of Real Housewives of Beverly Hills star Lisa Vanderpump erupted into flames Friday night, for unknown reasons. Although Lisa was not in the house at the time, as she just sold it last September for a reported $20 million, she was right next door filming the third season of RHOB with her fellow cast mates at the house of co-star Adrienne Maloof, who used to be her neighbor. Yesterday, Adrienne took the time to speak to People magazine about the ordeal.

“I looked and saw smoke and I thought it was the barbecue. But all of a sudden the smoke got heavier,” says the 50 year old Sacramento Kings owner, who was reportedly filming a scene in her backyard at the time. “I ran to the front and looked out of my front and Lisa’s [old] house was on fire. I went back and started screaming ‘Oh my gosh, we’ve got to get out of here!'”

The cast and crew was temporarily forced to shut down due to the fire, but Adrienne says it happened to fast for her to even do what she’d normally do when wrapping up filming for the day. “The fire was so close to our gate that I could feel the heat on my face. I was coughing, the kids were crying. I didn’t even have time to take my microphone off. I went into mama gear and I got the kids, the dog, the cat and we went to my mother’s house.”

However, Maloof also realizes this is an important lesson. “What something like this does is it puts into perspective how quickly a disaster can happen and how important it is to be prepared. It reiterated in my mind that I will take those steps to get our house safe for any disaster, fire being one of them.”

The fire was contained by firefighters after about an hour, but from the looks of the picture above, lots of damage was done. The exact cause of the fire is unknown at this time.