Alec Baldwin And Hilaria Thomas Just Might Get Hitched In Europe — This Weekend! 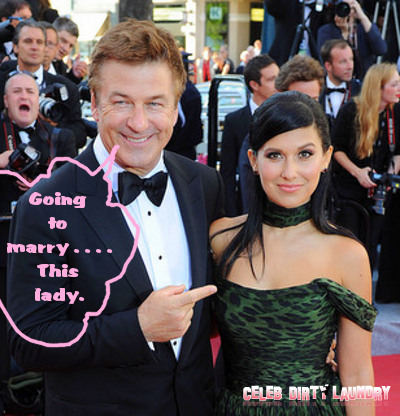 Alec Baldwin proposed to his yoga-instructor girlfriend, Hilaria Thomas, back in April so now the question is not a matter of if but when — when will the whole tying the knot thing take place? Maybe this weekend! Might these two be the next couple to have one of those mysterious, whirlwind-style weddings? And in Europe no less? While nothing has been confirmed or denied, Alec has made plans to vacation in Europe after he’s done shooting his Cannes Film Festival documentary with director James Toback . . . and people have prophesied that this will be the magical time when Alec and Hilaria finally decide to take their relationship to the next level, which can truly be a terrifying step to take when you’re a prominent member of the Celebrosphere.

Alec’s reps, when commenting on all the potential pre-wedding buzz, said, “We’re declining to comment on this speculation.” Similarly, a source close to the couple tells E! News Online that “They are keeping their plans private, but I’m sure they will enjoy spending time together out of the spotlight.”

You betcha they’ll enjoy their time out of the spotlight . . . and they’ll enjoy it while getting married! It seems like more and more  now celebrities are choosing the private nuptials route. And, let’s be honest, can we really blame them for wanting some element of privacy in their romantic lives? I know the whole “private” thing isn’t ideal for celeb-gossip-rumor-hungry celeb stalkers/writers like myself, but everyone deserves their space — definitely a hard thing to come by in Hollywood! Maybe Alec and Hilaria will find theirs in Europe somewhere.

And maybe we’ll have something more to celebrate by the end of this weekend.