Who Is Alexander Skarsgard’s Girlfriend – Is He Still Dating Alicia Vikander? 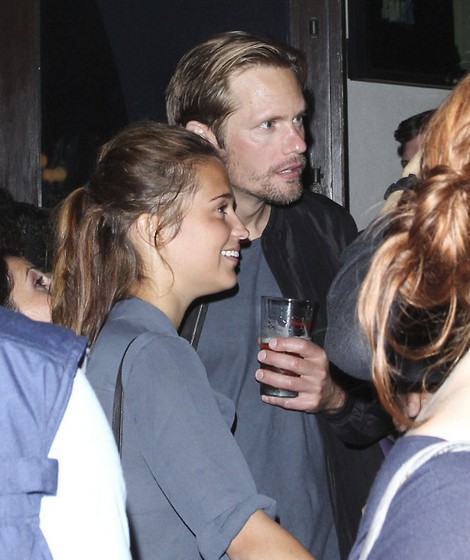 Alexander Skarsgard’s girlfriend hasn’t changed and his fans will be unhappy to know that the usually smokin’ hot Viking has been quietly dating a very young, stunning model named Alicia Vikander. There have been rumors linking the two for months now but nothing was confirmed until recently. The latest issue of Star Magazine has a tidbit in the print edition:

“How do you say “unbearably attractive couple” in Swedish? Try: “Alexander Skarsgard and Alicia Vikander.” Alex, 36, has been quietly dating actress Alicia, 23, a fellow Swede, for the past six months – and a souce close to the couple reveals, it’s getting serious. “Alex says he’s met his best friend and can really see himself marrying Alicia. They are definitely the real deal,” says the insider.

I wonder if Ellen Page, the actress he was supposedly seeing, knows about Alicia.  Alex and Ellen hooked up last winter and she was actually receiving death threats via Twitter, thanks to her relationship with the actor.

Truth be told Alex is one of those actors that often keeps his personal life quiet and just lets the press speculate. He has supposedly hooked up with Charlize Theron and Rihanna in recent months too. Will Alicia be the real deal or is she just another name quickly linked to the True Blood star?  There is a huge age difference between the new couple, with Alicia being 13 years his junior.  Do you think that will eventually be an issue if things really do get serious?  Who would you like to see Alex paired with? Tell us your thoughts in the comments below!