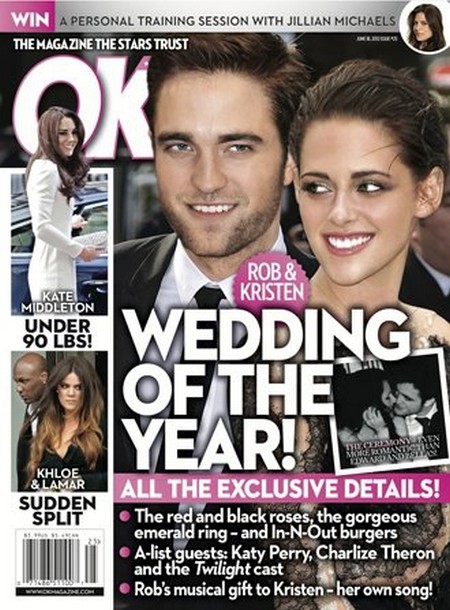 The current issue of OK! Magazine features the cover story ‘Rob & Kristen – Wedding Of The Year.’  The magazine claims to have the exclusive details on Twilight cuties Kristen Stewart and Robert Pattinson‘s upcoming wedding.  It seems that after the Cannes Film Festival the two have gotten closer and they are headed to the alter.   Robert even gifted her with a very special ring.  An insider revealed about the ring, “It’s a beautiful emerald ring.”

OK! has more: “He’s a real romantic and loves to take an opportunity to remind her that she’s the one. He gave her a ring because he adores her and wants to marry her.”  The wedding of Kristen, 22, and Rob, 26, is being planned for later this year, say several sources, who all agree that their real-life nuptials will be even more romantic than Bella and Edward’s.  “To them, the Twilight [Breaking Dawn — Part 1] wedding was cheesy,” says the insider. “They want their wedding to be much more authentic, with soul.

The wedding according to OK! will have an A-list guests including Katy Perry, Charlize Theron and the Twilight cast of course.  Kristen will carry red and black roses and their wedding dinner will be casual burgers.

To make the wedding special and personal  Robert will write a special song for Kristen and sing it at the wedding.   Robert and Kristen do not want their wedding to be cheesy like their Twilight one was they want it to be intimate and special.

So what do you think CDLers are Robert Pattinson and Kristen Stewart headed to the alter?  Hit the comments and let us know your thoughts!