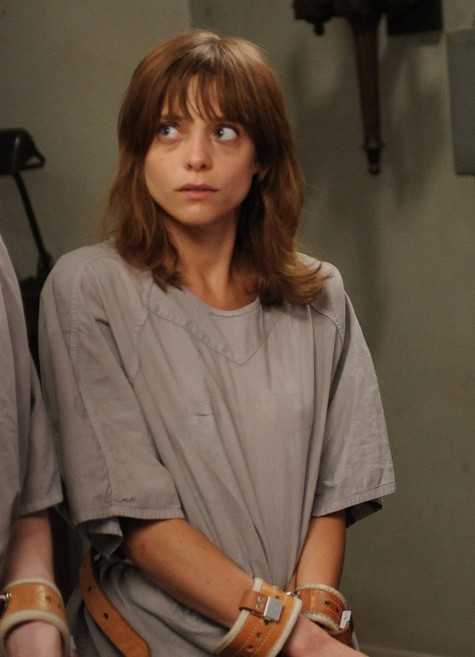 Tonight on FX AMERICAN HORROR STORY:ASYLUM airs with a whole new episode called “Tricks and Treats.”   Last week we learned this season’s show is set in 1964 and Asylum takes us into a Church-run haven for the criminally insane, ruled with an iron fist by Sister Jude (Jessica Lange), a nun with a troubled past. Inside this locked down facility, danger lurks around every corner. From Nazis and serial killers, to mutants and aliens, no one is safe inside these walls.

On last week’s show we got introduced to Briarcliff Manor, a notorious insane asylum home to the deranged serial killer, Bloody Face. Lurking in the shadows of this “sanctuary of healing” were terrifying evils that blur the boundaries between reality and insanity. Did you watch last week’s premiere episode?  We did and we recapped it here for you.

On tonight’s episode an Exorcist is summoned to Briarcliff to help save a troubled farm boy is he psychotic. Sister Jude’s darkest secret is revealed.  Dr. Thredson is appalled by the conditions at the facility, but there’s not much he can do in the moment. While he disapproves of the exorcism, he is drawn into helping with it.

Returning to the show tonight is Zachary Quinto, but not as ghost Chad Warwick.  “No, there’s no ghosts this year,” said Quinto. “And all of us that are coming back to the show from last season are playing totally different characters, which is one of the most appealing aspects of this season for me. To be able to explore totally different landscapes with these characters is really exciting.”

Tonight’s episode is going to be another spooky episode, which you won’t want to miss. So be sure to tune in for our live coverage of FX’s American Horror Story – tonight at 10PM EST!  While you wait for our recap, hit the comments and let us know if you are excited about the season 2 episode 2 of American Horror Story?  While you wait for the recap, check out a sneak peek of tonight’s episode below!

Tonight Recap: Tonight’s episode is “Tricks and Treats” and it looks like we’re in for another wild and gory ride! I’m way excited because one of my all-time favorite Vulcans/Brain Eating Heroes –  Zachary Quinto – is back! His Sylar was scary enough – I can’t wait to see how he behaves at the asylum!

We open with a scream! In our time period, Teresa is trying to get out of the asylum and runs into bloody face. She’s dragging one-armed Leo along and terror awaits her at every corner. A scary masked face dude stabs Leo repeatedly and he moans help me – Teresa bails on her bleeding beau and hides behind a closed door. Masked stabber beats on the door…

We’re back in 1964 and there’s another door being banged on. Lana’s girlfriend is having a pow-wow with some other lady friends and the banging on the door persists – they open it to find three masked scary people – but they’re just little kiddies – it’s the night before Halloween!

Lana’s galpal decides to go get her girlfriend out of the asylum the next day – but she’ll never get the chance. As she’s running a bath, good old bloody face pays her a stabby little visit. Right before he attacks she offers, “But I’m a school teacher…” Obviously bloody face isn’t trying for teacher’s pet… Now who’s going to save poor lesbian Lana from the big bad nun?

Back at the asylum, the orderlies are rousting all the crazies. Sister Jude is tossing their cells. Shelley leeringly tells Sister Jude she’s got a cucumber in her cell. The orderly finds a roster Lana’s keeping of the abuses – Jude wants to know if she’s going to call the American Civil Lesbians Union. The crabby sister confiscates the list and Lana tells her that she doesn’t need it – she has an excellent memory.

Sister Jude goes to see Dr. Arden and they discuss shocking some sense into Lana. Arden wants to know why Jude changed her mind about EST being cruel. The good doctor straps Lana down and gives her some brain juice. Shocking treatment of a patient…

Back in the asylum’s common room, Kit’s got a visitor – it’s Dr. Oliver Thredson (Zachary Quinto – yippee!!). He’s there to discuss Kit’s bloody face activities. Thredson’s the shrink the court sent to determine if he’s sane to stand trial. Kit tells him he’s sane – and tells him the aliens have his wife. Diagnosis: acute clinical insanity.

Sister Mary’s out feeding the mystery monsters in the yard when Dr. Arden comes to visit. He offers her a candy apple – never, ever trust a snake with an apple Sister! Arden commands her to take a bite of the apple and she obliges and finds it oh so yummy.

Lana’s having some problem tuning in – she’s a little crackly but overhears Kit talking escape. Thredson and Sister Jude chat – he’s concerned with the conditions at the asylum. He accuses her of abuse and malpractice rather than treatment and therapy. He tells her it’s barbaric – particularly trying to shock someone out of homosexuality.

She tells him to leave her to her job and to mind his own beeswax. He doesn’t look like he’s going to. Yay!!

Thredson is shocked and says he needs to see the boy. Sister Jude warns him not to wear out his welcome on his first day. They go to see Jed who lunges at Thredson and begins speaking in tongues. Thredson wants to medicate him – Jude says he needs something else entirely…

Lana’s taking a steam bath and asks Grace about an escape plan. Lana tells her about the tunnel. Grace wants to take Kit when they go and Lana said no because he’s a killer.

Shelley tells Dr. Arden she wants to go outside and offers him sexual favors. She tells him gross stuff about diddling herself when she was just five. She tells the good doctor that her hubby had her locked up because he caught her servicing two navy men. Arden calls her a whore and tells her she makes him sick.

Dr. Thredson tells Jed’s parents that they don’t need an exorcism – he needs treatment. The Monsignor tells him that not only does he expect him to stand by, but to assist with the exercise. They tell him having a doctor in the room is required so he needs to step up.

Back in the common room, the orderlies are shuttling the crazies out and putting them to bed early. Kit gives Lana back her notes he managed to rescue – but she’s unconvinced he’s a good guy. He tells her not to get caught with them on her.

The bed straps are getting a good workout in this episode – now they’re strapping down poor Jed. Sister Jude wants to stay for the exorcism but the good father kicks her out. She’s very upset.

At Dr. Arden’s place, he’s lighting candles on a romantic dinner, but his date reminds him he’s only paid for an hour and a half. She talks dirty and he tells her if she can’t behave she can go. He gives her a lesson on classical composers. He toasts to an evening of romance with a lovely and expensive wine. She refuses to drink the wine and tells him she doesn’t kiss on the mouth on “dates.”

She offers to dance for him if he plays something with a beat. He proffers a large knife and tells her to sit down. Then he starts carving the meat while asking her if she was concerned about the lady killer that was on the loose. She looks understandably uncomfortable.

Back at the asylum, Jed’s turned into a real little devil – he’s turning colors and saying horrible things. With the power of Satan (or his mind or something), he tosses Father Malachi across the room. The Monsignor brings in Sister Jude for back-up. He tells her not to talk to Jed, only to God. He says horrible things to Jude and locks her in the room with him.

She can’t escape and a flashback fires up with Jude singing in a red dress in front of a crowd. She’s in a dance hall cozying up to a soldier then making out with him and begs him to take her home. Back in the real, Jude is praying. Back to the past and Jude’s in her red dress driving drunk and plows down a little girl in a blue dress. She leaves the scene and thinks no one knows.

Jed turns into the little girl and calls her a murdered. He goads her into attacking him. When the Monsignor and Dr. Thredson come in to drag her off of him, he tells the Monsignor that Jude thinks about him when she touches herself at night. Jed’s out of control and they can’t contain him.
Lana’s awake and there’s a rattling in the asylum – the power goes out and all the doors open. Lana and Grace decide it’s time to make a break for it.

Kit comes down the hall and Grace wants to bring him along, but Lana’s convinced he’s a killer. Rather than escape, Lana screams for help and alerts the orderlies that Kit and Grace are trying to escape. Kit’s brutally beaten and Grace is dragged away. Lana cries.

Jed’s in cardiac arrest. The Monsignor is offering last rites and Jed dies. Sister Mary passes out cold. Methinks the beastie went from Jed to the good little nun.

Dr. Arden’s hooker is in the loo washing off her makeup and putting on the nun outfit her gave her. She finds a secret box of photos showing lots of blood and gore. Arden bursts in and smacks her around. He orders her to go lie on the bed without her panties.

He unzips and asks to see her “mossy bank.” Ick. Ick. Ick. This show is just gross! He lunges for her and she bites his arms and kicks him in the no-no – good for her! Is Dr. A bloody face?

Jed’s parents are told he’s kicked the bucket and the mother howls in grief.

Arden comes upon Sister Mary sleeping and is reaching to pull down her gown and wakes her – he says he was trying to protect her modesty. He tells her she needs to rest and relax after her fainting spell. She asks him who will take care of the creatures.

He says seeing her out of her habit is distracting. She says she doesn’t want to distract him from his “important work.” She flings off the covers and there’s a little bit of evil in her gaze as she watches the doctor go.

Lana asks Sister Jude if she’s going to cane her – she tells her to get it over with. Jude said she was impressed with Lana calling the orderlies to let them know Kit was escaping. She tells her she deserves a treat and tells her to open the door to get it.

Lana tells Grace she’s sorry and Grace tells her to screw off. Kit tells Jude he deserves the punishment not Grace. Jude agrees to give him Grace’s 20 lashes as well so he’ll get 40. She proceeds to bear him with an evil looking crop. He flinches and moans, but takes it like a man.