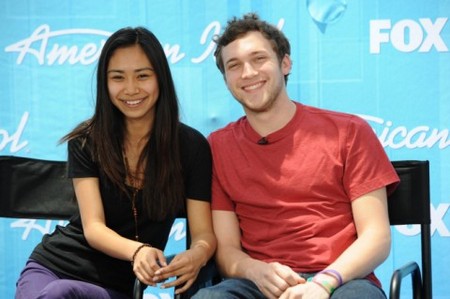 We are down to  our Top 2 and we are in the finale of American Idol.  The  top two remaining contestants, Jessica Sanchez and Phillip Phillips will be bringing their A game tonight and singing their hearts out for America’s votes.  Stand by as we live blog the whole episode for you with all the up-to-the-minute details.

Last week, producer Nigel Lithgoe revealed who was his favorite contestant, “I promised I would reveal my favorite when they were voted off the show so….. it was Joshua. However, I am thrilled for Jessica & Phillip.” I can understand how he feels, Joshua Ledet was by the far the most talented of the three, check out his performing “A Mans Mans Mans World” HERE and you will see what I mean.

So who will win tonight? Well Phillip has never been in the bottom two, but Jessica was due to be eliminated in the sixth week, but the judges saved her. Is this an indication of who will win? Probably not! I am rooting for Phillip but if our viewer comments are any indication then Jessica is going to win. Who are you rooting for? Hit the comments and let us know!

We will be live blogging ‘American Idol FINALE Top 2 Performance Show’ with all the up-to-the-minute details at 8 PM EST so make sure to come back to this spot and watch the show with us and find out how the Final 2 did! Refresh often to get the latest updates!

RECAP: It is finale week, the biggest event of this season and 7000 die hard fans are in the audience tonight. The final two, Jessica Sanchez and Phillip Phillip appear on stage (what the heck does Jessica have in her right hand? half of her dress?) and after a brief hello, they leave. Phillip won the coin toss last week, so Jessica performs first.

ROUND 1 – Jessica Sanchez singing ‘I Got Nothing’ by Whitney Houston and Phillip Phillips singing Stand By Me by Ben E. King

Judges Comments: Jennifer said, “this is a tough one because it is a battle of the opposites. At the end of the day America has a tough job.” Randy said, “the winner of round one is Jessica.” Steven didn’t have a chance to say anything.

Judges Comments: Steven said, “when it comes to Phillip you always don’t have to be a good egg, but Jessica took this round again”. Randy said, “I think that round was a dead heat, even.” Jennifer said, “I have to go with Phillip on this round, he was better.”

ROUND 3 – Jessica and Philips’ Singles

Judges Comments: Randy said, “I did not love the song, but you made something more out of the song, you have that Beyonce swag. You brought the song to life, but it was just ok.” Jennifer said, “you sang it well, I did not think your first single was going to be pop, but you will make many records and you need to say this is not me.” Steven said, “I know how good you can sing, but it was not the proper song for you.”

Judges Comments: Randy said, “ I love the song, I love you, everything about that was perfect, that was your best performance of the night, a true artist, I love it, brilliant genius.” Jennifer said, “it was so different, it was just Phillip and nothing on the radio sounds like that.” Steven said, “by virtue of your sound and style, you were perfect tonight, you are the man.