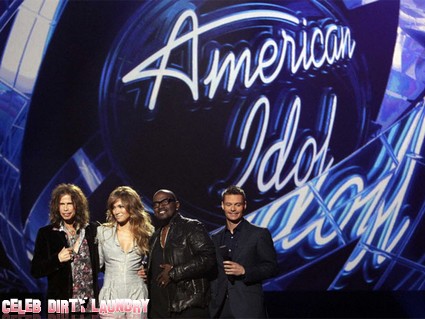 We saw the top 13 men perform on American Idol Tuesday night and the top 12 women perform last night and tonight is the result show.  It is time for the eliminations to being.  We have already been treated to four hours of Idol and tonight we will get another two hours.   After tonight I will be on Idol overload after six hours of it.  If you missed the men or the ladies performances you can read our official recaps here!

American Idol remained the No. 1 show among viewers 18-49 this week, but among total adults, it had to settle for second place on Tuesday night.  It was beaten by CBS’s long-running NCIS.  The ratings are in for the men and women episodes and the ladies take the lead.  The ladies got 17 million viewers while the men followed with a 16.1 million.

On tonight’s show we will find out who the 10 singers are who advance via viewer votes and the three wildcards by the judges who make it through.   Yes we have to wait two hours to find this all out!   Are you all Idoled out like me this week?  Sound out in the comments below and let us know your thoughts!

We will be live blogging ‘The Men’s Performances’ with all the up-to-the-minute details at 8 PM EST so make sure to come back to this spot and watch the show with us. Refresh often to get the latest updates!!

RECAP: Over 33 million votes came in over the last two nights and twelve people are going home tonight. Five guys and five girls are going right through to the next round based on America’s votes. Ryan dims the lights, here we go. After the nationwide vote, Jeremy Rosado did not make the top 10, Chase Likens is not in the top 10, but Phillip Phillips is!

Jimmy Lovine provides commentary tonight, here’s what he said about Phillips “I’d sign this guy on the spot.” He called it, Phillip is amazing and deserves top 10.

Time to turn to the ladies, this time Ryan calls four of them on stage. Brielle Von Hugel is not in the top 10, Hallie Day is not either, but Jessica Sanchez and Hollie Cavanagh are in.

“Give her the right material and she could do some real damage in this game”. Jimmy says about Brielle. He doesn’t understand her song choice and he fears it will hurt her, it did.

Time for some more guys on the stage. Joshua Ledet makes it to the top 10 and Heejun Han makes it. Adam Brock did not make it.

Jimmy calls Joshua “the real deal”, he says there’s no question that he is going to the top 10, although it will be Jimmy’s job to make sure it doesn’t become “Sister Act 3.”

Jimmy was really confused by Heejun, “This isn’t ‘American Comedian.’ This is ‘American Idol.'” The crowd was not happy about that comment.

Back to the ladies, another four on stage. Shannon Magrane made it to the top 10, wow that’s a shocker! Skylar Laine made it as well, that means…..

Jimmy thought “Baylie Brown seems to have all the pieces, but they didn’t come together” and Chelsea’s voice is really nice but it was “Carrie Underwood karaoke.” Was he right, did these two not deserve a place in the top 10?

Three guys are called up on the stage now. Time to dim the lights again, Aaron Marcellus Sanders did not make the top 10. Creighton Fraker is not in the top ten either and neither is Reed Grimm. The crows reacts and boos the decision.

Jimmy thought Reed was too cabaret and Aaron confused him. He thought Creighton’s voice was “interesting,” but calls the top end “screechy” and annoying. I guess America agreed with him.

Three ladies are next. There is only one spot left for the ladies, who is going to get it? Haley Johnson did not make it, Erika Van Pelt and Jen Hirsh did not make it either, Elise Testone made it.

Jimmy applauded Erika’s restraint and absurdly said that she could “go all the way.” Well, she didn’t so far, unless the judges push her through.

Time for more guys. Here we go, Deandre Brackensick did not make it (shocker!), Colton Dixon made it (thank you America), Jermaine Jones made it, which means Eben Franckewitz did not.

Jimmy said “I’m so glad the judges brought Jermaine back.” and Eben should come back next year, he’s not ready. Jimmy was right!

Jen Hirsh is the first contestant chosen to sing again and she chooses “Oh Darling.” The judges don’t want to commit, but Randy says “we love when contestants sing for their life, I loved your vocals, that was good.” Jennifer “we are going to try and be fair, you sang for your life.” Steven “you have a big voice, I loved it, especially the end.”

Jeremy Rosado is next singing for his life chooses a Carrie Underwood song. Jeremy is crying, Jennifer is crying, ugh! Jennifer “I believe in this kid, he’s got one of the most beautiful singers.” Randy “this guy has such a big heart and I love your voice, it was very nice.”. Steven “you are so real and that’s a beautiful thing.”

Brielle Von Hugel is the next lucky contestant to have a shot, she sings Adele’s “Someone Like You.” (didn’t Jimmy advise them to cut out the Adele songs?) Steven “I heard you pitchy in a few spots, I just didn’t get it this time”. Randy “that wasn’t great for me”. Jennifer “you should be proud of that last effort.” (Jennifer just can’t tell the truth, another Paula Abdul in the making)

Deandre Brackensick is genuinely shocked that he is chosen next and sings “Georgia On My Mind”. Randy “This is great, I love it”. Jennifer “this is what you have to do, you have to dig down deep”. Steven “I love it man, I just love it.”

Erika Van Pelt is next and I really liked her, she sings Mother Monster’s “Edge Of Glory”. Randy “this is girl has got to have it.” Jennifer “I love when a singer moves to tears but still does it”. Steven “out of the park, out of the park”. You could barely hear the judges comments because the crowd was cheering so loud.

One more person will get an incredible shot, Reed Grimm is the lucky guy and he sings “Use Me” by Bill Withers. The crowd love it. Randy “you are probably one of the most different people we have had perform on this show”. Jennifer “people really didn’t get to see you and we thought you deserved one more chance”. Steven “beautiful, you nailed it tonight”.

Each judge gets to pick a wild card, who is going to make it to the top 13? Randy gives the first wild card pick, Erika Van Pelt. Jennifer’s choice is next, she picks Jeremy Rosado who runs off stage and hugs the judges with Ryan’s approval. The last stool will be filled with Steven’s choice, Deandre Brackensick.

That’s it for tonight, come back next week when the idol contestants are mentored by Mary J Blige. The men sings Stevie Wonder songs, the women Whitney Houston.