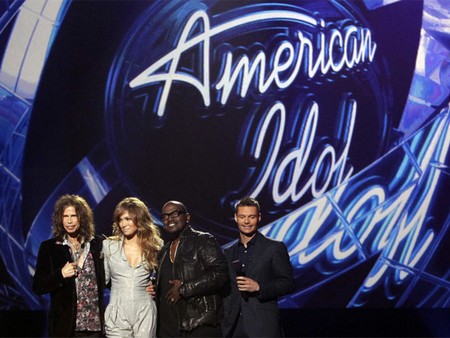 Tonight American Idol returns to Fox with the Performance Show and our Top 7 take the stage. Stand by as we live blog the show with all the up-to-the-minute details.  On last week’s show in the bottom two were DeAndre Brackensick and Elise Testone.

Judges Steven Tyler, Jennifer Lopez and Randy Jackson thought America got it wrong.  The person who was at risk to leave was DeAndre and Elise is safe. DeAndre sangs for his life in the hopes that the judges would use their only and almighty powerful save.   The judges decided not to save him and DeAndre was eliminated.  If you missed the result show you can read our full recap here!

On tonight’s show the Top 7 take on songs from this decade (2010, 2011, 2012).  They remaining contestants get some help from guest mentor R&B artist Akon.   Do you think Akon will give the contestants good advice?

Left in the competition are:  Hollie Cavanagh; Elise Testone; Phillip Phillips; Skylar Laine;  Joshua Ledet; Colton Dixon and Jessica Sanchez.  My favorite performer from last week was Colton Dion.  You can check out his performance from last week here!

RECAP: The finale is only a month away and all tonight’s finalists want to be on that stage in May. The contestants get some more fashion advice from Tommy Hilfiger, will they knock us dead tonight? Here are the hopefuls in order of appearance.

1. Skylar Laine is first tonight, Jimmy thinks she has picked a great song, he can feel it. Skylar wants to use the guitar but both Jimmy and Akon are against, they don’t want it to hold her back. Skylar is singing “Didn’t You Know How Much I Love You” by Kelly Pickler.

Judges Comments: Jennifer said, “It sounded like it was in perfect pitch, you nailed it, we felt it, it was a perfect way to start the show.” Randy said, “Let me just say you are definitely back, this is what you should do, I felt you for the first time, it was crazy hot, it was amost picture perfect with the pitch.” Steven said, “The crows may crow but the hens deliver the goods, just great.”

2. Colton Dixon is up next and Akon wants him to go beyond himself to the next level, Jimmy doesn’t wan’t him to jump on the chorus to quick. Colton is singing, “Love The Way You Lie” by Skylar Grey.

Judges Comments: Jennifer said, “You always surprise me with your approach with the notes, you do it so signature to you, I love the way you sing, it’s the mark of a good artist”. Steven said, “I love that jacket, you are such a rare talent, you could have recorded that right now that’s how good that is, you haven’t found your top yet, you are going to be so much better.” Randy said, “The jacket is crazy, what I love is that Jimmy and Akon were right, this subtle performance you gave was stellar, it showed your sensitivity, the shows is opening up to be one of the hottest shows.

Elise Testone and Phillip Phillips sing a duet, “Somebody I Used To Know”, by Gotye.  Jennifer said, “I love the feel that your duet brought to that song, Elise sang the mess out of that song, there was a little bit of imbalance there, but it was great.” Steven said, “You guys nailed it and I noticed she made you blush a little bit, it was a beautiful thing, good for you for picking that song.” Randy said, “This is the way I see it, Jennifer and Steven is right, but Elise was better than Phillip, the next time you do a duet Phillip has to choose a song that is more for him.”

3. Jessica Sanchez chooses a song that people are not that familiar with but Jimmy thinks she has soul, power and finesse. Akon can’t believe how crazy her voice is, he thinks she is the one. Jimmy hopes this song is going to be the right song. Jessica is singing, “stuttering” by Jazmine Sullivan.

Judges Comments: Jennifer said, “That was really beautiful, in the middle you started digging, you have an amazing opportunity to take America on a ride, I would love to see some Joshua type performances, take us on the ride.” Steven said, “Every time I hear you sing I forget where I am, you had the nerve to sing that song and Jennifer’s shoes.” Randy said, “I love the arrangements you do, you set the bar really high, that was superb at the highest degree, the control, you did an amazing job and slayed the biggest fish of the night.”

4. Joshua Ledet just celebrated a birthday and Fantasia comes on video to wish him well. Jimmy thinks Joshua is a dynamic singer and would like the band to drop out a bit to hear his voice more. Akon loves that Joshua listens and his voice is ridiculous, his tone could pierce through people’s hearts. Joshua is singing, “Runaway Baby” by Bruno Mars.

Judges Comments: Jennifer said, “You have so much control in your voice, you are so dynamic, you take control of the audience.” Steven said, “You can sell a song like a work of art because your voice is so good.” Randy said, “I don’t even know what to say, you were unbelievable, you have the look and the vocals, you are really in the zone.”

Colton Dixon and Skylar Laine sing a duet, “Don’t You Want To Stay Here A Little While” by Jason Aldean and Kelly Clarkson. Jennifer said, “You guys did a really nice job with it.” Steven said, “You just made love singing together, it was beautiful.” Randy said, “I love you both dearly, I thought that was ok for me.”

5. Hollie Cavanagh is missing a certain type of experience according to Jimmy and Akon. Hollie wants to prove it to them that she is ready for it, both Jimmy and Akon thing the song is perfect for her. Hollie is singing, “Perfect” by Pink.

6. Phillip Phillips chooses his song but Jimmy doesn’t think it’s exciting enough. Akon wants to include more piano, Jimmy likes it, he finds it more intimate. Phillip is singing, “Give A Little More” by Maroon 5.

Judges Comments: Jennifer said, “For me it was a little bit underwhelming for what you always do, maybe it’s the song choice, it wasn’t everything that I know you can give us.” Steven said, “The more you are singing melody and hit lines, you evolve like Steve McQueen or Johnny Cash”. Randy said, “I agree with Jennifer, I think that it was not much of a wow type of performance.”

Johsua Ledet, Jessica Sanchez and Hollie Cavanaugh sing a trio, “What Doesn’t Kill You Makes You Stronger” by Kelly Clarkson. Jennifer said, “This is the season of the big voices, really amazing.” Steven said, “Holly Josh and Jess, beautiful.” Randy said, “This is dope, this a good trio here but I have to give the edge to Josh.”

7. Elise Testone is trying really hard and wants to use the drums, Jimmy and Akon are against it. Jimmy thinks she can get out of the bottom three and Akon thinks everything is banking on this performance. Elise is singing, “You And I” by Lady Gaga.

Judges Comments: Jennifer said, “You did exactly what you wanted to do, there is no one that can sing like you.”
Steven said, “You turned that song into genius, beautiful.” Randy said, “America Elise is back, that was the perfect song for you, you needed a moment and you got one, dope vocals there.”

That’s it for tonight, Joshua and Elise were the winners for me tonight, I don’t think Hollie is going to make it another week. Tomorrow night we will be live blogging the results show, don’t forget to come back to find out who is going home?